The assignment was alluringly simple. 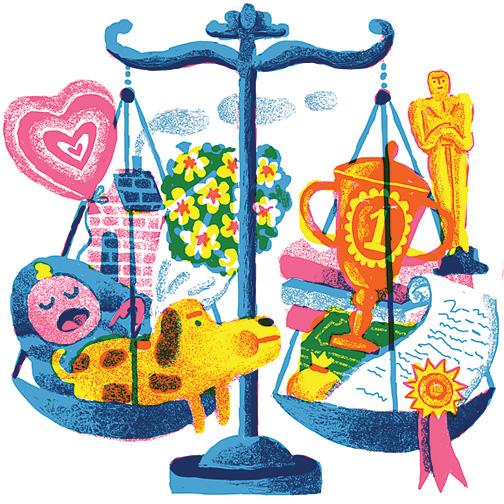 Come up with a theme for a reunion panel, then choose four classmates to speak. The theme was a no-brainer: “Life Lessons in the Age of Disruption.” Perfect for a 35th reunion, when many of us are switching jobs, switching homes, or even switching partners.

As for the speakers, they’d need to come from a variety of backgrounds. And they shouldn’t be self-centered or pretentious. No problem. This is Brown, not Princeton.

One day I had lunch with my contrarian classmate Stuart Post. “You’re enamored with success,” he said. He sounded like a description of what used to be called a Modes of Thought course: “Is success measured by a career? A relationship? Involvement in a community?” Sure, Stu said, the nominees were extraordinary. And that was the problem: “I don’t want to listen to people my age who make me feel like a failure.” (I refrained from mentioning that I’d contacted Craig Mello, a Nobel Prize–winner for genomic research.)

Stu wondered if any panelist would bring up divorce, illness, job setbacks, or just plain normal life experiences. That got me thinking. What about Jim Austin, who lives on a sailboat with his husband? Or Jim Ferris, a full-time student of yoga? Or Jim Levin, who adopted a child at age fifty-three? Maybe a panel of joyful Jims? I’d already reached out to Donna Conaton Baer, who married our classmate Steve Baer. They have ten children, all home-schooled by Donna. I’ve visited the bustling “Baer den,” and I know her story is as compelling as anyone’s.

As I write this, we’ve invited six panelists for Commencement weekend: two men (the boat resident, the Nobel Laureate) and four women (the musician, the mother of ten, the ambassador, and the International Red Cross policy adviser).

“The Zeppelin guitarist. The Sailboat Guy. The Nobel.” Sounds like the opening to an only-at-Brown story.

David L. Marcus, author of Acceptance, a book about college admissions, is still summoning the courage to try his freshman-year dream of being a stand-up comic.