Ashton Cumberbatch had already decided against going to Brown when he visited campus in April 1975. The Brooklyn native had decided to attend Haverford College, but he received an invitation to visit Brown as a prospective student and—hey, free trip to Providence! Little did he know that his timing was historic. 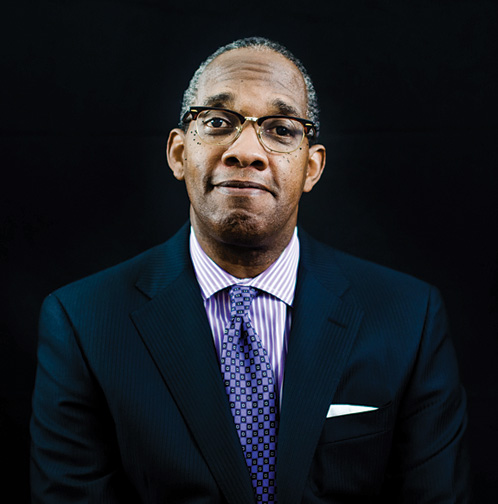 “That was the weekend black students took over the administration building,” says Cumberbatch ’79. “They had been negotiating with the administration to make the campus more inclusive, and there I was right outside University Hall—it was such an exciting prospect to be a senior in high school and see a place where students were committed to making a change for good. I determined on the train ride home that I was going to Brown.”

Over his last three decades living in Austin, Texas, Cumberbatch has become one of the city’s leading community advocates, a passion he attributes in part to his time on campus. “The work I started at Brown is very much related to the work I’m doing today,” he says. “I’ve always wanted to cultivate a holistic community, where everyone has an equal opportunity.”

At Brown he also found a spiritual calling. “I always went to church,” says Cumberbatch, now an executive pastor at Agape Christian Ministries just north of Austin, “but, when I was at Brown, I really got involved with a campus ministry group and some predominately black bible studies, so I was growing not just academically but spiritually.”

It was divine intervention, Cumberbatch insists, that led him and his soon-to-be wife, Jennifer Rousseau ’79, to Austin: “I didn’t know anything about Austin or the University of Texas,” he admits. “For me, the earth stopped south of Virginia.” Then a chance conversation changed everything.

“One day I was in Robinson Hall talking to a friend who said he was going to apply to all the good law schools except for the University of Texas, because it didn’t have a medical school, and his fiancée wanted to go to medical school. And right then,” says Cumberbatch, “the Lord spoke to me and said: ‘That’s where I’m sending you—Austin, Texas.’”

After completing law school, Cumberbatch became a prosecutor. He then progressed to leading the trial division in the Travis County District Attorney’s office and was appointed as police monitor for the city. He also made partner at a local law firm. At the same time, Jen worked as a pastor, vocalist, playwright, and entrepreneur—her delicious Sweet Tater Torte is an Austin favorite.

Cumberbatch has always combined getting ahead with giving back. Today, he is executive director of Seton Foundations, the fund-raising arm of a major Catholic health-care network in central Texas, a position he holds while “on loan” to Austin mayor Steve Adler’s office as a policy adviser.

One of Cumberbatch’s projects, the Spirit of East Austin, helps bring “equitable, sustainable, transformative, and holistic development” to the east side of Interstate 35, an historically underdeveloped and underrepresented area of town. Cumberbatch also serves on the mayor’s task force opposing institutional racism in Austin, which ranks as the most economically segregated metropolitan area in the United States.

Whether fighting for social and racial parity as a member of the Austin Independent School District’s Citizen’s Bond Board, promoting economic development as chair of the Greater Austin Black Chamber of Commerce, or sponsoring civic engagement with the Austin Bridge Builders Alliance, Cumberbatch has taken his message from God and applied it to a life of service.

Reader Responses to A Higher Calling