Growing up in Providence, Lehidy Frias never dreamed she’d become an academic. “I thought I was going to be a hairdresser, because that’s what my mother did,” she recalls. Then her fourth-grade teacher, Yanaiza Gallant, got her dreaming bigger. Now Frias plans to be a professor of anthropology. 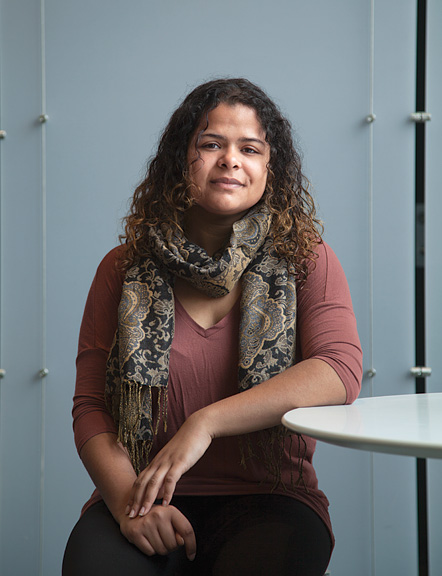 Gallant helped steer Frias into a college-prep path, urging her to apply to a gifted-ed program for middle school and then to high school at Classical, a public magnet school. Without that teacher’s guidance, Frias says, she’d never have made those ambitious moves.

“My parents had no idea,” she says. Both are immigrants from the Dominican Republic; neither finished high school. “In second grade I missed three days because they didn’t know school had started.”

At Brown, Frias has been focused on making a difference for others facing some of the challenges she has experienced. She has led the Latino Heritage Series of lectures and events, making sure to offer tickets to underprivileged Providence community members. She joined the Alpha Chi Omega sorority, because she believed in their work supporting the Crossroads Women’s Shelter in Providence: “I had dealt with a lot of domestic violence in relationships in my family,” she explains.

She’s a trained member of the Brown Mediation Project: “I’d been an unofficial mediator in my family’s life,” Frias says. And having been hospitalized for lead poisoning as a child, her internship at Rhode Island’s Childhood Lead Action Project “felt full-circle.” She translated for her mom at doctors’ appointments for years and now volunteers as a translator at Clinica Esperanza, a low-income health clinic. She also teaches low-income kids.

There are too many other activities to list. Some students get addicted to Facebook; Frias got to work. “When I get really anxious and overwhelmed I apply for jobs,” she says. “I like to stay busy because I have depression, anxiety, and PTSD.” She says she’s proud of herself for getting counseling now.

Frias started out premed, but decided that anthropology’s more qualitative approach to health disparities, her subject of interest, “rooted me in understanding the issues.” Last summer, Frias won a Karen T. Romer Undergraduate Teaching and Research Award to study health inequalities in Peru’s elderly population. Sources don’t always have to be a textbook, she found: “They can also be an interview, they can be a person.”

Frias appreciates this more holistic research. “Focusing on just theories makes you lose the complexities.” And she believes that all the public-service work she’s been doing has enhanced her understanding. “I will be a better anthropologist because of my teaching,” she explains. For example, she says, “This student was acting out, and I was tempted to yell at him, and found out his mother has just been deported.” She’ll carry this insight into her academic research as she pursues her PhD.

“I have to realize there might be more complex things going on,” she says, “and that things are not always as they seem.”