Tori Kinamon, a native of Peachtree City, Georgia, who was recruited for the Brown gymnastics team, was flying toward her future. Really flying. Her best event, the uneven bars, was the art of defying gravity, of “doing things your body shouldn’t be doing,” she says. 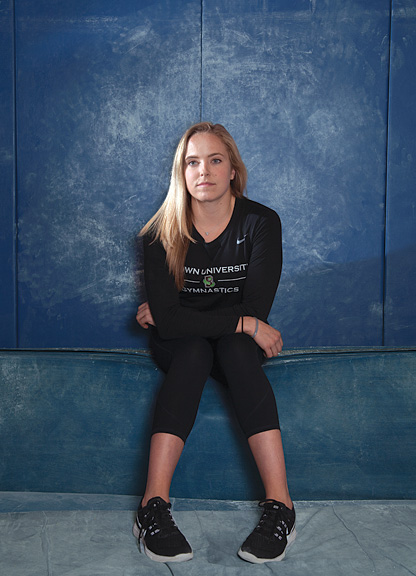 Dana Smith
Tori Kinamon is fighting a killer bacteria in the locker room.

Seven meets into her first season for the Bears, however, Tori crashed. She developed a dangerous infection, buried deep in her left leg, that turned out to be methicillin-resistant Staphylococcus aureus (MRSA)—also known as flesh-eating bacteria. It took eight surgeries and three months before she could walk again.

Kinamon, a premed student, wondered if college athletes were at particular risk for MRSA. The experts had no answers. One of the people she turned to was Eleftherios Mylonakis, a Brown professor of medicine, molecular microbiology, and immunology, who is chief of infectious diseases at Rhode Island Hospital. Under his mentorship, she conducted a meta-analysis of the scientific literature on MRSA in athletes. The conclusion she reached was stunning: while 2 percent of the overall population is colonized with this superbug, it was present in 13 percent of U.S. college athletes. Kinamon coauthored a paper on the results that was published in the journal Clinical Infectious Diseases last spring.

With the help of a Royce Fellowship in Sports and Society, she next asked, “What is the best way to prevent MRSA infection?” She contacted Deverick Anderson, leader of Duke’s Infection Control Outreach Network, and in an incredible moment, she recalls, “Dr. Anderson told me, ‘I was going to send you a great paper on the topic, but you wrote it.’ It felt so good to know that the research wasn’t just staying within me.”

In medical school, Kinamon plans to specialize in infectious disease research and outreach. But before that, she will leave all Bears a bit healthier with a superbug prevention video that she hopes will eventually be distributed throughout the NCAA. “We protect each other on the field,” she says, “and we also need to protect each other in the locker room.”

And gymnastics? Kinamon not only beat MRSA, she made it back to her team and scored a 9.725 on the bars in the next season’s opener. For her passion and dedication, USA Gymnastics awarded her the Mari-Rae Sopper Spirit Award. Unfortunately, she then tore her Achilles tendon, and, back on the mats again junior year, her ACL. She credits Athletes in Action, a Christian group, for helping her accept that a decorated career in collegiate athletics was no longer possible. “My faith grew so much at Brown,” she reflects.

“My college experience obviously wasn’t anything that I had thought it would be,” Kinamon says, “but it was so much more meaningful than I could have hoped to make it."