“How do you explain magic to a person in a way that they will then be able to convince the rest of this world magic exists?” Mark Baumer ’11 MFA wrote on his blog, Barefoot Across America, on December 6 of last year. He was reflecting on the impossibility of capturing the spirit of his friend and former student, Nick Gomez-Hall ’13, who had died four days earlier in the Oakland, California, Ghost Ship fire. 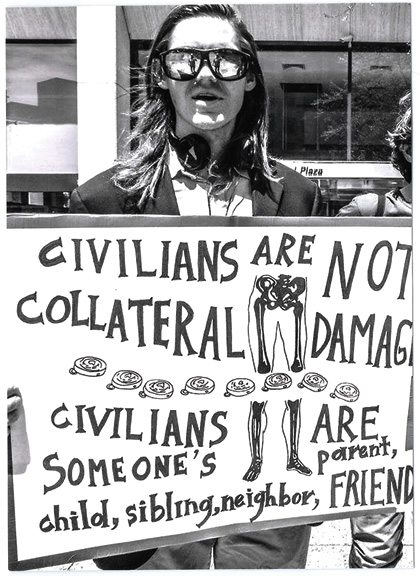 Courtesy of the Baumer Family

As I compose this piece about my late friend Mark, I think about his magic. How do I explain it?

An award-winning poet and a resident of Providence, Mark was an employee of the Brown Library and  author of the 2015 Quarterly West novella contest winner Holiday Meat, as well as of a number of self-published books. He was also an activist, a performance artist, a yogi, a son, a friend, and a vegan who was walking barefoot across America to raise awareness about climate change when he died. On January 21—the 101st day of his walk—he was struck and killed by an SUV in Florida. He was 33.

During his barefoot walk (he’d also walked across the country six years ago, wearing shoes), Mark was raising funds for the FANG Collective, a Providence-based nonprofit that opposes the fracked-gas industry. Walking barefoot was an extension of his barefoot running practice; it was also a gesture that blurred the boundary between the Earth and his body.

Every day, Mark created content for various social networks and for his website, notgoingtomakeit.com: aphoristic essays, poems, photographs, videos. This word—content—not only  signifies information made available via electronic media; it’s also an adjective describing a state of peace. Mark’s walking was both a nonviolent protest and a meditation; it was also his writing practice.

Yesterday, I wrote an e-mail to Mark. I am not the only person who has been writing to him. Since his death, people have picked up his daily writing practice as a collective epistolary work addressed to him. Susannah Elisabeth Fulcher ’12 MFA is writing to Mark every day for 100 days. “Mark is teaching me about his daily public writing practice in ways I could not have expected,” she says. “As he was during his lifetime both in the classroom and by constant example, Mark continues to be a remarkable teacher.”

Evelyn Hampton ’12 MFA wrote a long essay that includes him. And Kristin Hayter ’16 MFA  composed a song, “100 Days,” whose lyrics remix language from Mark’s final Barefoot Across America entry. She performed it at The Mark Baumer Celebration of Life, held at the Granoff Center on February 4. The memorial was so well attended that even the building’s overflow room was full.

Part of Mark’s magic was how he could make the virtual feel physical, and vice versa. Perhaps this is why I cannot remember the last time I saw him. Was it when he ate his cell phone as part of a performance in New York City? Was it at a dinner party on Skype in the company of Ian Hatcher, MFA ’11, and Darren Angle ’11 MFA? Was it when he Snapchatted me a video of himself listening to Grouper’s “Headache” in the glow of his laptop? Or was it when I navigated to his Twitter feed and scrolled into the past?

My hope, I said in my e-mail to Mark, is that if I write this, you will read it because you are in the Internet.

Travis Lloyd ’14 relayed a story to me about a Fiction I class Mark taught at Brown. “It was the first day of class, and it was a packed room,” Lloyd recalled. “Mark said, ‘This is a writing class.  We’re going to write every day. Put a pen in your hand and grab the hands of people on both sides of you.’” Lloyd was sitting next to Nick Gomez-Hall, who became his close friend and bandmate. “We grabbed the pen together and wrote a little story which was just a back and forth between the two of us, which went along the lines of: ‘Wow, this guy is strange.’ ‘Yeah, I know! But cool though, I think. I’m excited.’”

Sending love, gratitude, and appreciation, I wrote at the end of my message. I miss you so much. The world feels broken apart. Meanwhile, on Earth, we are all finding fragments of peace—of content—by holding hands and writing together to Mark.

—
What do you think?
See what other readers are saying about this article and add your voice.

Reader Responses to Write Every Day