This is a story about elephants, who, as it turns out, are even more remarkable than you thought. 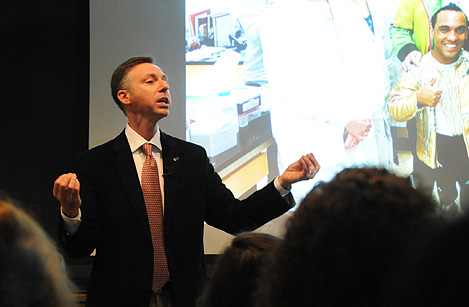 Frank Mullin
Doctor Joshua Schiffman '96 describes how the elephant came to be a major part of his cancer research.

But first here are some statistics: one half of all men and one third of all women will develop cancer during their lifetime, and those percentages may climb as we all live longer. If you live long enough you are likely to develop cancer.

Why? Cancer arises out of a mistake a cell makes while dividing in our bodies. As we age, the odds of a single bad transfer of DNA from an old cell to a new one go up as the process repeats over more years. In fact, many of the most common cancers, such as colon cancer, occur in organs with high rates of cell division.

Our best protection against a bad cell’s surviving a mutation and reproducing out of control—essentially the definition of cancer—is a protein known as p53, which has been called the guardian of the genome. P53 looks for damaged cells in our bodies, and when it finds one it at first attempts a repair, but if that’s not successful it destroys the damaged cell. Most of us are born with two p53 genes, one from each parent, but occasionally a child is born with only one, or with a mutated p53 gene, either of which means a nearly 100 percent chance of developing cancer, possibly multiple cancers.

That’s where elephants come in.

“I am now a lover of all things elephant,” said Joshua Schiffman ’96, ’00 MD near the beginning of his May Commencement forum titled “Learning from Elephants to Treat Patients with Cancer.” Schiffman, the medical director of the High Risk Pediatric Center at the Huntsman Cancer Hospital in Salt Lake City, pointed out that elephants, who live nearly as long as humans and have a lot more cells dividing all the time, never get cancer.

The reason? It could be that, instead of two p53 genes, elephants have 40. And, unlike our p53 genes, those of elephants don’t bother trying to fix defective cells. They obliterate them.

Schiffman has spent the last several years researching what this might mean for human cancer treatment and prevention. As an oncologist who obviously likes to spin a good yarn, often at his own expense, Schiffman told an entertaining story of his attempts to get elephant blood for his research (from Salt Lake City’s Hogle Zoo and the Ringling Brothers circus) and to find collaborators to help him discover a mechanism for delivering EP53 (the E stands for elephant) in a way that might destroy cancer cells in a human patient.

So far Schiffman and his colleagues have successfully used nanotubes to destroy the cells of various human cancers in petri dishes. Despite this early success, though, many more tests are needed, both in petri dishes and, eventually, mice before researchers can begin to think about using EP53 in human cancer patients.

And Schiffman really has no idea what side effects such treatment would produce. One obstacle is that once you introduce EP53 into blood, you can’t turn it off. It’s possible, then, that all this destruction of imperfect cells, whether precancerous, cancerous, or neither, could actually speed up the aging process.

“I like to ask my class,” Schiffman said, “‘What if I could make sure you never get cancer, but it takes a year off your life? Would you do it? What if it took five years off? What if it took ten?’”

These are the kinds of questions elephants may one day have us asking.

An expert on last century’s influenza pandemic shares what history could have told us about COVID-19... if we’d been willing to listen.
Ever True

A new course combines the history of boat building with hands-on construction.