If you’re looking for a dispassionate analysis of President Trump’s ethics, you may want to skip this story. 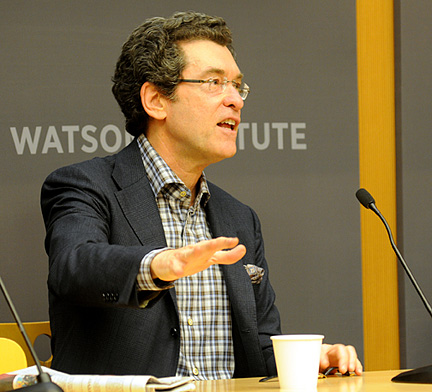 Frank Mullin
Norman Eisen '85 argues that in our democracy we are seeing a perversion of the idea of public service.

“We have never seen in our country a president come to office with a collection of cronies and nepotistic hangers-on so completely unqualified to govern,” Brookings Institution fellow Norman Eisen ’85 said at a May Commencement forum titled “The Constitution, Corruption, and the Presidency.” Eisen, a former ambassador to the Czech Republic, was the ethics czar in the Obama White House, although, he says, when it comes to politicians who bend for special interests, “I’m equally critical of Democrats.”

In the Trump administration, Eisen argued, “We are seeing a perversion of the idea of public service.” The problem, he said, is not just what Trump may or may not have done. By disregarding the precedent of all past presidents of the past forty years to release income tax forms and to sever previous financial ties by setting up a blind trust, Trump, Eisen believes, “creates a cancerous tone at the top” that encourages “a Constitutional disdain for law.”

As the board chair of Citizens for Responsibility and Ethics in Washington, Eisen, along with George W. Bush’s White House ethics czar Richard Painter and Constitutional scholar Laurence Tribe, among others, filed suit January 23—three days after the Trump inauguration—against the president for violating the “emoluments” clause of the Constitution and illegally receiving payments from Russia.

Eisen and Painter have often collaborated on editorials about Trump’s ethics, and can be heard opining on NPR and various cable political shows. It’s something he never anticipated doing thirty years ago, when he was concentrating mostly on his grades. As a Brown student, he recalled, he lived in Perkins and worked at health services at a job that, unlike earlier ones in the library or the dining hall, gave him time to study on the job.

“Back then,” he said, “I never could have imagined, while walking from Perkins down the street to my job, that the New York Times would one day be calling me to write an editorial.”

Eisen said he remains confident that in the end our Constitutional system of checks and balances will prevail over White House excesses, although he identifies a deeper problem: that “the presidency has acquired too much power,” something that has been happening gradually ever since the Cold War. What’s needed in the White House, he argued, “is a little bit of downsizing.” That would be a first step toward “restoring the fabric of collegiality in the United States.”