It was not your grandparents’ baccalaureate address. 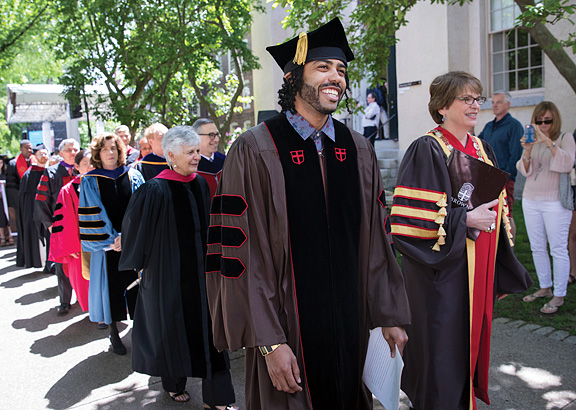 On May 27, standing in a Brown cap and gown and surrounded by the austerely beautiful interior of the First Baptist Church in America, Hamilton star Daveed Diggs ’04, winner of the 2016 Tony for Best Featured Actor in a Musical, stood behind President Christina Paxson and other senior administrators and blew the doors off the place. In an address with the deceptively simple title of “Daveed Diggs Says Some Things,” he delivered a fresh, multilayered talk that was part spoken-word performance and mostly a rich and often funny commentary on fame, failure, politics, history, racism, perseverance, careerism, and a life after graduation characterized by couch-surfing, a nagging mother, and a decade of “laughable letters and calls from the [Brown] Annual Fund to donate money I did not have.”

Diggs’s ready smile, free-flowing delivery, and self-deprecating air belied the tight complexity of his speech. At its heart was the conceit that the Daveed Diggs standing before the assembled graduating class was not the Daveed Diggs that had been invited to receive an honorary doctorate from his alma mater: “I don’t think I’m the one you came to see.… People don’t get asked to do these things. Lists of accomplishments do.”

The Daveed Diggs invited to give a baccalaureate address was much younger than the one standing before the rapt seniors sitting before him, Diggs said. In fact, he’d been born only on January 20, 2015, four days before the other Daveed Diggs’s thirty-third birthday and the first day of Hamilton’s spectacular Broadway run. That infant Daveed Diggs made a moving speech at the Tony Awards that was covered around the world. That Daveed Diggs was invited to late-night TV shows, red carpet events, and cocktail parties. He gave talks, accepted more awards, and found himself on a cruise ship with civil rights activist and poet Sonya Sanchez. He is still toasted wherever he goes.

The Daveed Diggs speaking in the First Baptist Church, on the other hand, was an ambitious undergraduate who walked across the College Green in the rain wearing brightly colored clothes, worked in the student call center (“Do they still call dead people?”), and had the youthful temerity to turn Jean Toomer’s novel Cane into a rap lyric, which he now used to open his talk, shaking his head at his own youthful naïveté. (“You’re like twenty-one, what do you know, man?”) “I’m much older and far less interesting than Daveed Diggs,” he said. “I’m far less sure of myself.”

That Daveed Diggs was born in two hospitals, because the Oakland hospital to which his mother first went would not allow her to have a natural childbirth and so she went over to Berkeley, where the hospital would accommodate her. (“You can give us a room,” she said, “or we can have this baby right here in the lobby.”) That Daveed Diggs, the first on his father’s side of the family to go to college, has no memory of the baccalaureate speech given at his own Commencement, has no memory, in fact, of receiving his diploma. (“Well, you made it,” his mother said. “I can stop nagging you now.” Diggs: “She did not.”)

But he does remember, among other things, going to London for a week with the track team afterward, then moving back in with his mother for longer than he cares to admit; doing a bunch of plays no one’s ever heard of; substitute teaching; moving in with a friend in Oakland; moving to New York City, where he couch surfed for nine months, auditioning ten to twelve times a week and booking nothing; running out of money and using his mother’s frequent flyer miles to return home; doing more plays no one’s ever heard of; designing a rap curriculum for Bay Area middle schools; falling in love several times; moving to Los Angeles, where he auditioned for many, many commercials and landed only one, for McDonald’s; and eventually moving back to New York, where he would audition for the musical that wound up giving birth to the other Daveed Diggs.

One day, though, a couple of weeks before moving to New York to start rehearsals for Hamilton, he was getting on his bicycle, carrying cash for a money order he needed to give to his landlord to pay his rent, when two policemen stopped him and slammed him against his neighbor’s fence, grabbing his hands and cuffing them behind his head:

His breath is hot upon my neck, we are this close
My hands are folded on my head
I’m doing everything he says
I know how this goes
My nonchalant demeanor is usually meaningless
But if I live today I’ll know that this will be the reason why
The badge he thinks gives him his power lets me know
That actually at this moment he is every bit as scared as I
He’s been trained that I’m his enemy
In an institution whose motto is to protect and serve
If this is what I can expect for protection
Then having that as a motto seems a bit absurd
He never questioned who he was in service to
And let’s be honest, man, a motto is just some words
I know the pen is mightier than the sword
But can it stop a bullet, homie? I’m just not  sure.

I exhale and keep my voice low
Yes, you can search me.
No, I do not have any weapons you should know about
My backpack is gym clothes and rent money, sir.
May I go now?
And another part dies in politeness
At least not the part that can write this
But there’s only so many times I can bite this tongue
And I’m not the only person who feels like this.

“This,” Daveed Diggs said, “is what you are being born into,” a time when the country needs people who “challenge all explanations,” who don’t think outside the box because they reject the premise that there is a box.

“Our world desperately needs you now,” Diggs said. “We need your new ideas, because our old ones made a mess of things.”

Working the frontlines for the CDC
The Arts