For this issue President Christina Paxson invited Vice President for Campus Life Eric Estes to share his insights on a national conversation about gender identity that is affecting higher education.

What is the impact on Brown students of the federal government’s recent decision to withdraw guidance on protecting students who are transgender and gender non-binary [having gender identities that are not exclusively male or female]? 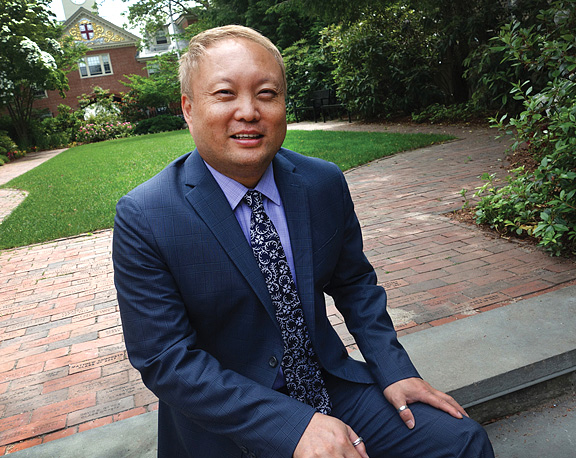 We’ve been hearing a lot about “gender-neutral” or “gender-inclusive” pronouns. Can you provide a quick explanation of how gender-neutral pronouns are being used?

ESTES Increasingly, people who do not identify as either male or female prefer to be addressed by a gender-neutral pronoun such as “they” rather than “he” or “she.” Similarly, it is becoming more common to use “they” or “their” when referring to someone whose gender identity is unknown, for example “The student submitted their application to Brown.”

I know the use of “they” or “their” as a singular pronoun can feel discordant, but grammar evolves over time. In fact, the use of “they” and “their” as singular pronouns dates back centuries, and includes authors such as Emily Dickinson and William Shakespeare. More recently, this use is increasingly being adopted by mainstream style guides. I’m excited that the Associated Press is helping to establish the standard nationally for news reporting, so that consumers of news will come to understand, and with hope appreciate, the use of gender-neutral pronouns.

Why is the use of gender-neutral pronouns a special issue for colleges and universities right now?

ESTES In 2016, the Common Application started asking college applicants to designate their “sex assigned at birth,” in addition to their self-identified gender identity, with choices of male, female, and a third free-response field that allows applicants to describe their gender identity. This change makes it all the more important for colleges and universities to use gender-neutral pronouns in correspondence with the families of admitted students. Protecting the privacy of our students is important, and we must be sensitive to the fact that parents may not be aware of their child’s self-identified gender identity.

More generally, addressing students, faculty, and staff by their chosen pronouns shows respect and acceptance, and helps them to feel fully included in the life of the University. Failing to do so can have an adverse impact on the ability of a student or employee to equitably access resources and, therefore, limit their educational or employment opportunities.

How does Brown reconcile its attention to these gender-identity issues with a national landscape that may not be as attuned to them?

ESTES Brown has always been at the forefront of social change. Brown decided to include gender identity and expression in its non-discrimination policy more than fifteen years ago. And Brown is not alone. Numerous peer institutions and affiliated organizations such as the NCAA have undertaken important policy and practice changes to better support trans and gender non-binary students.

Brown’s decision to embrace concerns of trans and gender non-binary students can provide leadership for other higher education communities. It’s part of Brown’s legacy of supporting historically underrepresented people in higher education. And we’re talking about people who still experience significant discrimination in employment, housing, and health care, as well as appalling acts of harassment and physical violence. By supporting and respecting trans and gender non-binary people, Brown can influence the national climate.