Welcome to Your World: How the Built Environment Shapes Our Lives by Sarah Williams Goldhagen ’82 (Harper)
If you’re reading this indoors, a secret force is already at work on you: the building you’re in is helping shape your emotions, your thoughts, your behavior, and even your memories. That’s one of the conclusions, based on recent cognitive science, in this compelling tour of how the built environment affects us. In what turned into a seven-year project, Goldhagen traveled the world and wound up with a forceful argument that a well-built environment is not simply a luxury but an actual need. 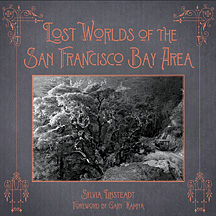 Lost Worlds of the San Francisco Bay Area by Sylvia Linsteadt ’12 (Heyday)
In this intriguing and sumptuous book, you’ll find novelistic essays about eighteen vanished San Francisco worlds. The “worlds” here, illustrated with vintage photographs, period postcards, and some full-color advertisements, include the Point Molate Whaling Station, which was used until the late 1960s; Neptune Beach, a Coney Island–like bathing spot on the Alameda coast; and the Oakland redwoods, a grove of ancient trees, some thirty feet in diameter, that were logged by 1860. A vivid look into what used to be.

It Happens in the Hamptons by Holly Peterson ’87 (William Morrow)
At the start of Peterson’s third novel (The Manny, The Idea of Him), Katie Doyle decides to move, along with her eight-year-old son, from Oregon to Long Island for the summer—hoping to fan a brief affair with George, an investment banker, into a more substantial romance. In this perfect beach read, Katie instead finds herself in a swirl of lavish wealth, sudden extramarital affairs, and sharp betrayals as she tries to navigate between Southampton’s upper- and middle-class worlds.

A Promising Life: Coming of Age with America by Emily Arnold McCully ’61 (Scholastic)

A Journey To God: Beyond Christianity by John Birchall ’86 (AuthorHouse)

Beatles, Books, Bombs, and Beyond by Robert J. DeLuca ’66 (Createspace)

A Patient's Guide to Unnecessary Knee Surgery: How to Avoid the Pitfalls of Hasty Medical Advice by Dr. Ronald P. Grelsamer ’75 (Skyhorse)

It's All Relative: Adventures Up and Down the World's Family Tree by A.J. Jacobs ’90 (Simon & Schuster)

The Schmuck In My Office: How to Deal Effectively with Difficult People at Work by Jody Foster and Michelle Joy ’07 (St. Martin’s)

Immediations: The Humanitarian Impulse in Documentary by Pooja Rangan ’08 AM, ’12 PhD (Duke)

Naked in the Public Eye: Leadership in an Era of Accountability by L. Oliver Robinson ’91 (Rowman & Littlefield)

The Diversity Bargain: And Other Dilemmas of Race, Admissions, and Meritocracy at Elite Universities by Natasha Warikoo ’95 (Chicago)

Love Letters to the World by Maia Geddes ’14 (Poetose)

Having just read Veritas, I was pleased to learn from the review (“Fresh Ink,” Beyond the Gates) on p.45 of the January-March 2021 issue that Ariel Sabar is a Brown alumnus from the class of 1993. The whole truth, however, should have been told, namely that Karen King, the duped Harvard Divinity School professor at the heart of the academic scandal that Sabar brilliantly investigates, received her PhD from Brown in 1984.