Sometimes the simplest choices are fraught with peril. Take, for example, asking a new acquaintance to go out for coffee. What if the person says no? Or what if he or she says yes, and you bond instantly over lattes? Will you end up having to shell out money you don’t have to attend this person’s overpriced wedding? 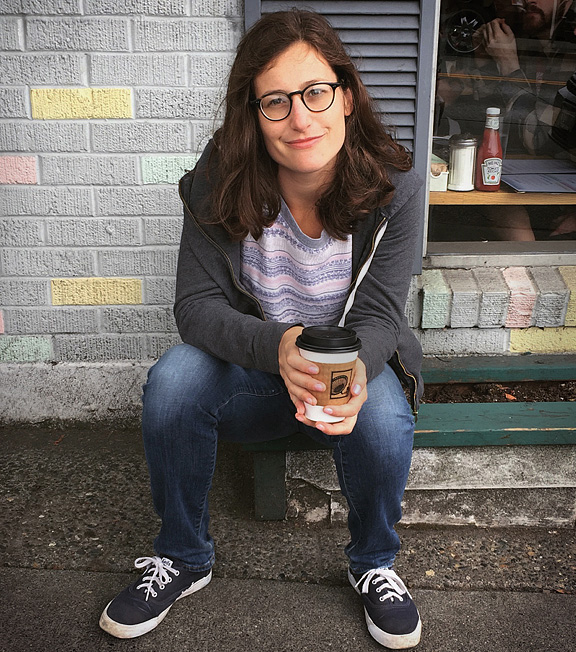 Hallie Cantor '11, a writer for television and magazines, finds humor in the typical fears of everyday life.
These are the kinds of things that Hallie Cantor ’11 ponders in her frequent contributions to The New Yorker’s humor and satire department, Shouts & Murmurs. Cantor, who was also a writer during the third season of Inside Amy Schumer, has been mining the universal fears of everyday life for laughs ever since her first year at Brown, when she began writing for the satirical newspaper the Brown Noser. It was her first crack at comedy writing, and she was hooked, soon broadening her audience by joining the Brown Jug humor magazine and the Brown Stand-Up Comics.

It was during a summer editorial internship in New York City working on the popular website CollegeHumor that Cantor realized comedy could be a sustainable career. “They showed me that it doesn’t have to be some cocaine-fueled stand-up club,” she says. “It can be a real office with real funny, smart people working there.”

She kept in touch with CollegeHumor staff, and after graduation she landed a full-time job as a staff writer for the site. It was there, while filming a sketch, that Cantor met Amy Schumer, who had just wrapped the first season of her breakout Comedy Central series. Schumer encouraged Cantor to submit a sketch packet, and in the fall of 2014 Cantor was hired to write for the show.

Over about three months, Cantor joined the show’s writing team in pitching and workshopping about fifty sketches. The next year they won an Emmy nomination for Outstanding Writing for a Variety Series. Cantor is proudest of a sketch inspired by the steady stream of engagement photos that began popping up on her Facebook feed during that time; the final script elevates the cheesy tropes of engagement photo shoots to absurdist extremes.

Since Inside Amy Schumer, Cantor has written for the first season of NBC’s variety show Maya & Marty, which stars Saturday Night Live alums Maya Rudolph and Martin Short. Cantor describes Maya & Marty, which is produced by Lorne Michaels, as a sort of “summertime SNL.”

Last fall, she temporarily relocated from Brooklyn to Los Angeles in order to write for the second season of Netflix’s Lady Dynamite. This genre-bending sitcom, which dramatizes comic Maria Bamford’s life, has earned praise from The New Yorker and the Atlantic, among other publications.

For Cantor, it was a dream job—one in which she had just as much fun writing material as people had watching it. “On the weekends,” she says, laughing, “I would be like, ‘Ah, Monday needs to hurry up and get here because my job is so fun.’”

Reader Responses to Fun at Work