"I could kill a dinosaur!” my ten-year-old son exclaimed, as he kicked a big piece of post-snowstorm ice and sent it skittering down the sidewalk. The cause of his frustration? A lecture on mindfulness, by none other than the Father of Mindfulness himself, Jon Kabat-Zinn. 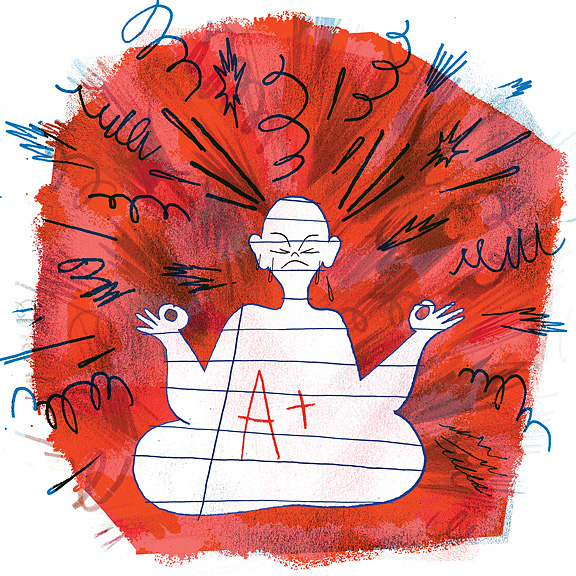 Many of my friends were on his side. As we sat in the Friedman auditorium last March waiting for Kabat-Zinn to begin, I posted on Facebook: “Dragging the 10-year-old to a 1.5 hour lecture on mindfulness by Jon Kabat-Zinn. Pray for me.”

I meant to be amusing. The not-amused comments started pouring in. “Why would you take him to this?” asked one friend. “Is this a test to see how non-judgmental your fellow parents are? ’Cause I’m kinda judgey,” said another. “That’s not very mindful of you,” a third chided, more wittily.

I was a bit surprised by the intensity of the comments, since every Catholic I know was forced as a child to sit through mostly unintelligible stuff for the same amount of time every Sunday in hopes they’d slowly start to absorb it. Not that they’d enjoyed the experience any more than my son was going to enjoy this, of course.

My partner had felt that, since my son had been going to weekly kids’ meditation classes and actually engaging with them despite a fair amount of sneering before and after class, he might absorb something. I was extremely skeptical, but thought, as my more supportive friend, Emily, commented, “He might learn something. Or not. That’s fine too.”

So I shrugged, decided I may not know everything there is to know about parenting my child, and took him, thinking Kabat-Zinn might talk about the health and performance benefits of mindfulness, which might actually interest my science- and sports-oriented tween. But after an hour of talking, the professor looked at his notes and said, “Oh, I left all that out, but maybe it’ll come up in the questions.” It didn’t.

So, did my son learn anything? Do you suppose he figured out the meaning of reify, a word Kabat-Zinn used at least five times? I can tell you that Kabat-Zinn said, nearly two hours in, that there are “something like 86 billion neurons” in the human brain, and my son leaned over to me and whispered, “actually it’s 150 billion.” I was stunned: the kid was in the moment, not dreaming about Minecraft!

I can also tell you that by the end, after it seemed as if it was over but folks started up with bloviating “questions” and we were trapped in middle seats and my fifty-five-year-old partner became bored enough to start picking at loose threads in his scarf, my son got so mad at me that a few tears of rage and frustration appeared on his cheeks.

It was after we’d finally escaped the auditorium and spilled out onto the frozen sidewalk that my son kicked at the ice and threatened the imaginary Thunder Lizard. This is a ten-year-old who has a history of major behavior problems in the classroom and of throwing things at his mother’s head. Just a few years ago, I was still honestly worried he’d end up in juvenile detention. No more.

For this kid, the self-control evident in his performance at the lecture showed extreme strength of mind—which probably is, in part, due to the mindfulness practice he’s built through kids’ meditation class. And he was paying close enough attention that he probably did learn something. So in effect the Jon Kabat-Zinn lecture was my son’s mindfulness/meditation final exam.

I think he passed with flying colors.

Louise Sloan is the BAM’s deputy editor.
Illustration by Charlotte Dumortier
What do you think?
See what other readers are saying about this article and add your voice.