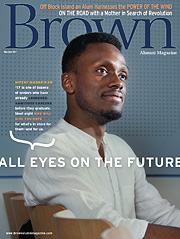 I was so gratified to read “Fact-Checking History,” Myacah Sampson’s story about the role of students in arguing for diversity at Brown (May/June). I’d like to add to that story.

Protests at Brown started before 1968, though perhaps in a different way. As a WWII refugee Hungarian immigrant, I was thrilled to be accepted at Pembroke, knowing the opportunities it offered me on so many levels. However, during freshman week of 1962, when our Pembroke dean came to welcome freshman residents of Metcalf dorm, I confronted her about the lack of diversity in our class. I told her, “I came to Brown not just for academic classes but to learn about the U.S. from students of different races and backgrounds. When I look around this room, my Pembroke classmates all look like me.”

She proudly said, “We admitted three black students to the class of 1966.” My reply was, “Yes, but two are from Africa. Why aren’t there more black students from the U.S.?” She told us, “It was hard to find qualified minorities.”

I was absolutely unconvinced, but that prejudiced statement stayed with me as I researched cultural and economic biases in methods of identifying giftedness during my career in education. At least twenty of my publications over the last thirty years reported the many biases in American assessments that favor white middle class students and established equitable methods for identifying diverse students with gifted potential.

I applaud the fact that Brown has come a long way, not just for the diverse students who are contributing to our culture, but also for us white students who need to learn about American diversity not just from books or lectures, but from our classmates.

So now there is an app for doing laundry? (“Clean Sheets,” Under the Elms, May/June) This is a nod to efficiency, for sure. But the laundry room used to be a sort of informal place for social connection, believe it or not.

I remember waiting in the basement of New Pembroke for my clothes to finish during a nice break from the rigors of school. But this short piece stresses that doing laundry “can feel like a waste of time when balancing classes, homework, meals, and jobs.” Do students really need an app to get a text update for when a machine becomes available? They don’t have a couple of hours or so a week to just “wing it?” They could even find some valuable Facebook or Twitter time while waiting for their socks and underwear to dry.

I understand how technology helps us streamline many facets of life. But doing laundry? Come on.

I was delighted to read the “Hidden Treasures” article by Louise Sloan ’88 (Finally, March/April). It reminded me of my own experience while at Brown. Forty years ago my wife, Michelle, discovered a painting by another Kiowa artist, Stephen Asah, face up on the floor of a Fox Point junk store and rescued it for seventy-five cents. Twenty years later we found a print by Stephen Mopope from Oscar Jacobson’s 1929 Kiowa Indian Art portfolio at a trading post in Seaside, Oregon. Both works will eventually find their way to the Haffenreffer Museum as part of our donation of American Indian Art. We have always lived by our adage “art is where you find it.”

I read with some unease the letter by Mikka Pineda ’04 about student debt (“Carrying Debt,” Mail Room, May/June). While I agree with running stories on a wider range of “higher-flying alums from less privileged backgrounds,” I have a concern over the idea that “even an article or two about a low-achieving alum could bring more diversity and realism to your comment.”

Whom, exactly, would the writer view as low-achieving? If it’s someone with only a modest income, how about a father who works part-time to care for a special-needs child? Or a mid-level employee of veterans affairs who treats members of our military with respect and compassion?

Personally, when reading Classes, I love to see an alum expressing satisfaction for a forty-year career as a middle school teacher. Were anyone to suggest she is a low achiever, I think most of us would be taken aback.

But much less expensive are increasing efficiencies and using renewable sources of energy. For example, LED light bulbs use only one-sixth the energy of incandescent bulbs to produce the same amount of light. That decreases the amount of fuel burned at power plants and, thus, the amount of carbon emitted. 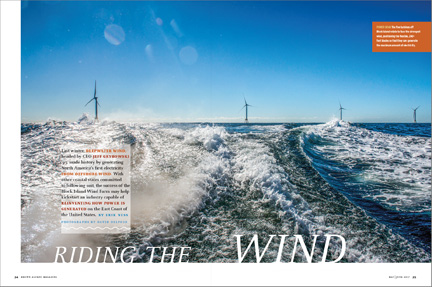 In reference to your article about the Block Island wind farm and Jeff Grybowski ’93, you may be interested to know that I, a fellow Brunonian, was Rhode Island’s outside commercial expert (“Riding the Wind,” May/June). I evaluated the cost of the project and its economic impacts to the state and testified before the Rhode Island Public Utility Commission. Jeff’s company, Deepwater Wind, also received approval for the Skipjack offshore wind project by the Maryland Public Service Commission, and I was that state’s outside commercial expert on the same issues as well.


Grybowski’s puff for wind energy and the Block Island project only takes one side of the controversy. A reader will find a different view on the web and in such books as John Etherington’s The Wind Farm Scam. Grybowski admits that wind-generated electricity is three times as expensive as electricity from conventional sources, explains how the state’s people are being taxed to pay the difference, and claims that economies of scale will bring the cost down. He is silent about the other difficulties, notably that wind energy is intermittent and does not work when the wind is either too weak or too strong.

In this reader’s opinion, renewables will never generate much of humanity’s energy, which will be produced from fossil fuels, as it is now, and they will be progressively replaced by nuclear energy.

The letter from Gordon Hamilton ’74 regarding the late Father Howard O’Shea eloquently calls attention to this beloved Catholic chaplain’s contributions to Brown’s Catholic community and to the University as a whole (“Fr. O’Shea’s Legacy,” Mail Room, March/April).

But the letter is wrong in suggesting that Brown’s Catholics were entirely neglected before Howard O’Shea’s arrival. By September 1966, at least, we had mass every Sunday morning in Manning Chapel, provided in turn by two visiting priests from the Providence Diocese. Howard’s midnight masses were a great step forward—as was his presence on campus more generally—but “Protestant services” had not excluded Catholics from Manning beforehand.

Like so many other professors of English, I am deeply indebted to Professor Robert Scholes (“This Is What Became of Me,” Obituaries, March/April). I recall that both he and his wife, Joanne, hosted the loveliest and most memorable winter holiday parties at their Victorian home. I recall almost getting lost one year in its various and endlessly charming rooms. Professor Scholes was an amazing genius. I will never forget our conversation about the poet Edna St. Vincent Millay at one of his parties, nor his love of sailing near her home in Maine. His one-page writing assignments made him a famous bicoastal figure, and I found out just how wonderful these assignments could be when I began teaching online at Washington State University and introduced them to my students for the first time, helping them transform their writing. Here is a champagne toast to him and to Joanne Scholes!

I have finally perused the March/April 2017 issue and want to thank you for your editorial decision to honor outstanding faculty members in obituaries that may sometimes take up more space than normal. The piece on Robert Scholes may be a case in point, and I appreciate your editorial decision not only to include several letters in your Mail Room section but also to devote a long and moving tribute to him in the Obituaries part of your magazine. As a PhD student in comparative literature, I sat in on some of his courses and remember him so well. We all profited enormously from his wisdom and personality.

I was similarly moved by the tribute by Victoria Kaprielian ’81 to Professor Sears R. Jayne and to the Rev. Howard O’Shea (“The Priest and the English Professor,” Mail Room). Similarly, I add this tribute to Professor Jayne and to Rosalie Colie, who was the first woman to chair the Department of Comparative Literature:

When the department was established in the late 1960s, Rosalie Colie, an outstanding teacher, took great personal interest in the first group of international doctoral students, which included me. She became my dissertation adviser, but, after her untimely death, I changed midstream to Professor Jayne. The unexpected side effect of this change was that he asked me to preface my literary dissertation with a ninety-page “excursus” on the history of firearms, which he considered a prerequisite to the subsequent literary analysis of three seventeenth-century epics. This new research, however, was the only portion of my dissertation completed by the December 1972 deadline for impressing, at the Modern Language Association annual meeting, a faculty search committee at Northwestern.

Professor Jayne’s unflinching support, his warm personal interest in my wife’s and my emotional condition, and his discipline enabled me to meet this deadline and begin an academic career that I owe in great part to Rosalie Colie and Sears Jayne.

A scientist and a lawyer make it easier to use lawsuits as a weapon against global warming.
The Arts

Working the frontlines for the CDC