If, as the Duke of Wellington once said, “the battle of  Waterloo was won on the playing fields of Eton,” Long Strange Trip, the new Grateful Dead film by Amir Bar-Lev ’94, was spawned in a Brown lecture hall. It was there, thanks to religious studies professor Harold Roth, that Bar-Lev first soaked in the world’s various religions. 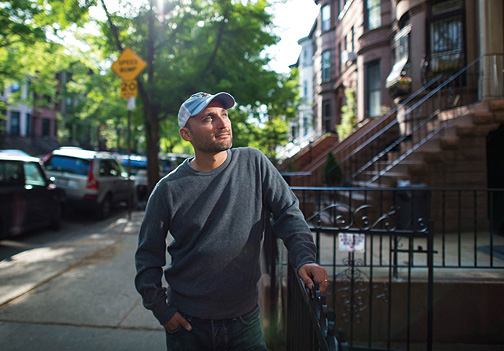 “This story of this utopian collective is very much informed by the things that I learned from Hal Roth,” Bar-Lev said recently by phone. “The story of the Grateful Dead is intermeshed with the story of mysticism.”

Long Strange Trip, which includes Martin Scorsese as an executive producer, may seem like a sharp break from a filmography that begins with the 2000 Fighter, which focused on two Czech Holocaust survivors, and that extends through 2007’s My Kid Could Paint That, about a controversial child painting prodigy, and both The Tillman Story, which focused on NFL-star-turned-Afghanistan-war-casualty Pat Tillman, and Happy Valley, which focused on the late, tarnished football icon Joe Paterno ’50. But to Bar-Lev, all his works share an immersion into a world of deeply held belief and spirituality that he’d first explored in his religious studies classes on College Hill.

“I studied religion and modern culture and media,” he says. “I make films about religion, about how people project meaning.”

In the case of the Grateful Dead, the tie-dyed authenticity of the band that originated in San Francisco’s 1960s “acid tests” is what initially interested Bar-Lev, who grew up across the bay in Berkeley and came of age during the time of bombastic, smoke-bomb-fueled arena rock. The Dead’s live-for-the-moment ethos—and founder Jerry Garcia’s early death in 1995—convinced Bar-Lev that someone needed to tell and preserve their story, even if that wasn’t something high on the survivors’ to-do list.

Indeed, much of the film’s tension comes from Garcia’s struggle to reconcile his belief that music should be open and accessible with all the inevitable pressures of fame as the Dead’s cult status intensified in the 1970s, 1980s, and 1990s.

“What he loved about rock ‘n’ roll is that it breaks down divisions and is transcendent,” Bar-Lev said. That spirit has led such critics as the Boston Globe’s Matthew Gilbert—who said that Long Strange Trip, which is four hours long and was fourteen years in the making, “tells the story beautifully, organically, and, by the end, tenderly”—to hail the documentary’s fresh perspective on a seemingly over-familiar tale that would appeal even to non-Deadheads.

It also preserves a legacy of community that Bar-Lev—now the father of three children, aged seven, five, and three—would love to see carried on. “The drug that I’m worried about today,” he quipped, “is social media.”