There’s something primal about an eclipse. If you needed proof, it was there in the numbers of people milling about campus green spaces on August 21. The moon may have covered up only about two-thirds of the sun in Providence, but the enthusiasm on campus for the eclipse was total—and then some. 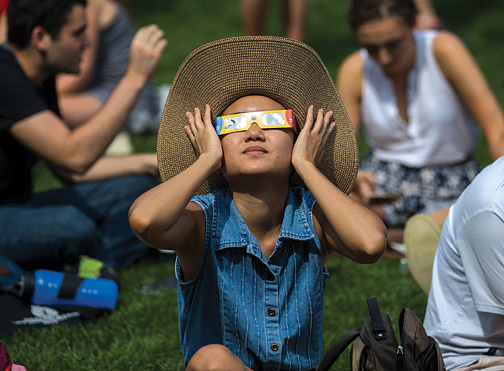 Nick Dentamaro
Where did all these people come from? Did they stream out of campus buildings, bringing the University to a halt? It was as if students, staff, and faculty, all of them staring upward, needed one last release before the fall.

The ingenuity of the Brown community was also on display. Science departments set up telescopes and handed out safe viewing glasses featuring a confidence-inspiring NASA logo. Astronomical conversations alternated with more pedestrian expressions such as “Cool!” and “Awesome!” Some viewers preferred to build their own viewing devices rather than rely on NASA’s glasses. There were pinhole cameras made out of cardboard. One man could be seen viewing through an old shredded wheat box, and another viewer’s head was completely inside a shipping box.

Some alumni made it to where the eclipse was total. Jane Widness ’07, Dan Winograd-Cort ’08, Rohan Ramesh ’12, and K.T. Ramesh ’88 PhD gathered in a park in  Rexburg, Idaho. “Totality was a nearly visceral experience,” K.T. Ramesh reported.

Reader Responses to Looking Up