The Welfare of Others

When An Wang Professor of Computer Science John Savage joined the Brown faculty in 1967, he assumed he’d stay for two, maybe three years. That was fifty years ago. With this fall semester he begins his fifty-first year of teaching. 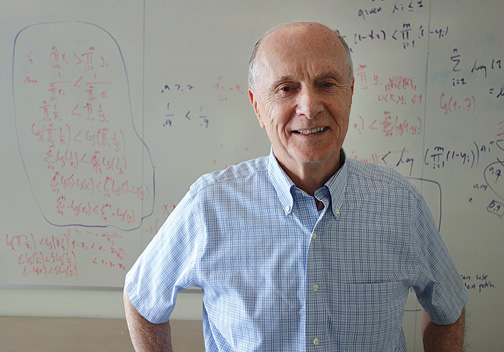 At the time of Savage’s arrival, the computer science department did not yet exist. Nor did Savage consider himself a computer scientist. With an electrical engineering PhD from MIT, he was hired as an engineering professor. But his research led him to computer science and he quickly recognized the field’s burgeoning importance.

Along with fellow professors Andy van Dam and Peter Wegner, Savage cofounded Brown’s first computer science program, which became a department in 1979. Since then, Savage has done foundational research in communication theory and theoretical computer science; worked on parallel algorithms, scientific computing, and computational nanotechnology; and more recently tackled cybersecurity, Internet governance, and other public policy issues. He has served as a Jefferson science fellow in the U.S. State Department and is a professorial fellow of the EastWest Institute, an international affairs think tank.

“I’ve seen computer science change its focus from being inward-facing and building tools, systems, and infrastructure, to turning more outward-facing by contributing more and more to society in general,” he says. “I expect that will continue.”

The joy he gets from teaching and mentoring students also continues, he says: “I’m the oldest of six siblings. And probably because of that I tend to be concerned about the welfare of others. So I put a lot of time into looking after my advisees, students I encounter in courses, and the teaching assistants I work with.”

When José Castaños ’96 ScM, ’00 PhD, who is now a researcher at IBM’s Thomas J. Watson Research Center, first arrived at Brown, he wasn’t sure what he wanted to do. Then Savage convinced him to pursue a PhD and worked with him to develop a thesis project.

“He was always available to provide support when things were not coming up that well but also allowed independence to help me find my way,” Castaños says. “He provided high-level guidelines for my thesis but let me develop it further so I never felt I was implementing someone else’s project. He was a great advisor, and we had a very close relationship.”

In recent years, Savage has been teaching classes in cybersecurity. To immerse undergraduates in the subject, over the past few years he’s taken teams of undergraduates to the Cyber 9/12 Challenge, a cybersecurity policy competition sponsored by the Atlantic Council.

“Professor Savage was the best mentor we could ask for, providing us with support and encouragement around the competition and taking a deep interest in our lives beyond Cyber 9/12,” says Sarah McNeil ’17, a 2016 team member. “I will always be thankful for his kindness, wisdom, and excitement about the world around him.”

Luke Camery ’17, ’17 ScM was a member of the 2015 team. The first all-undergraduate group to win the competition’s top prize, they defeated teams of mostly graduate students and policy professionals. “John would wake up early with us and stay up late with us,” Camery recalls. “He would let us rehearse with him, give us pep talks after harsh feedback from the judges, encourage us when we were worried about facing opponents twice our age, and inject fun into the experience at every opportunity.”

Camery adds that Savage was also helping them plan their futures: “After we won the competition that year, John chatted up the vice president of Symantec who had given us the first place prize. Through John’s networking, one of [the team members] actually worked for her that summer.”

Even after fifty years, Savage is still looking for the best way computer science can have the largest impact. He sees the discipline as a collaborator in tackling the biggest societal issues out there.

“I would like to offer an invitation to my colleagues at Brown,” he says, “to work with us in computer science in confronting issues in political science, international relations, economics, and other domains. There’s an opportunity for all of us to work together to address the problems we see nationally and internationally.”

Reader Responses to The Welfare of Others