This past summer, Wendell Pritchett ’86 became the first African American provost of the University of Pennsylvania. With a law degree from Yale and a doctorate in history from Penn, the 53-year-old Pritchett has long studied urban policy, education, and race relations as a scholar, teacher, and university administrator. He also chaired the Redevelopment Authority of Philadelphia, sat on that city’s School Reform Commission, and served as president of the Coalition of Urban and Metropolitan Universities. As chancellor of Rutgers-Camden from 2009 to 2014, he helped the campus sidestep a merger and presided over the school’s expansion. Most recently, he was the Presidential Professor of Law and Education at Penn’s law school and has served as the law school’s interim dean. 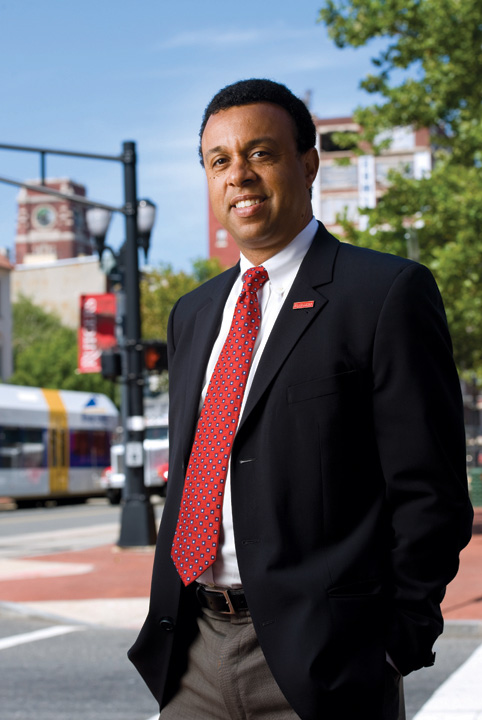 BAM What do you see as the main challenges for higher education right now?

WP We should represent the diversity of the country. More broadly, I certainly think that higher education as a field has to be expanding access and figuring out how we can support students to be able to afford education and also to get through to graduation. Finances are a big deal.

BAM A Harvard faculty committee has recommended abolishing campus fraternities and sororities, as well as private clubs. What do you think a university’s role should be in regulating student social life?

WP I don’t have any comment on Harvard—other than to say that President [Drew Gilpin] Faust was a mentor of mine when she taught here. We have been pretty active in that area, too. We had a Task Force on a Safe and Responsible Campus Community.

BAM Was that a euphemism for, “Let’s not have people get drunk or be sexually assaulted?”

WP Those were among the agenda items. The committee released a report this spring. Many recommendations focused on building students’ abilities to make good choices and holding all of us responsible for when choices aren’t what we want them to be.

BAM What were specific recommendations?

WP One was [increasing] staff and student trainings about drug and alcohol awareness, about the need to protect yourself from mental health issues, and to be aware of your peers’ mental health issues. There will be student committees that will have a role in examining what happens in different incidents. Having them take more ownership is a relatively important thing.

WP That is not in the report.

BAM Universities have been caricatured as citadels of “political correctness,” where free expression sometimes gives way to the protection of student sensibilities. How do you see this issue?

WP Universities have always been places of contention and argument, and they always will be. It would be a terrible thing if we weren’t arguing—that’s our purpose. The only way to get to a robust solution is to allow for free expression. In tension with that [is] the desire to promote respect for each other. What I tell students is that even though those things are in tension they’re not in conflict. We can figure out how to do both at the same time. And we have something that is an innovation: Open Expression Monitors [now called Open Expression Observers].

WP When we expect there’s going to be a contentious discussion in a public event, we have people trained to help facilitate an open, respectful conversation. I think it works pretty well.

BAM How has your educational and career trajectory, including your time at Brown, prepared you for this position?

WP What drew me to Brown is I wanted to be able to tie a bunch of interests together without people telling me how to do that. I’ve always had a lot of interests, and as I moved from place to place, they were all connected to the Philadelphia region. They all have, in different ways, a goal of helping this region grow, and helping people who have not had all the advantages that I’ve had be successful.
What do you think?
See what other readers are saying about this article and add your voice.