“I was helping kids and at the same time destroying their future.” That’s how Ann-Christine Duhaime ’77 felt when she thought about the environmental impact of her work as a pediatric neurosurgeon at Boston’s Massachusetts General Hospital. 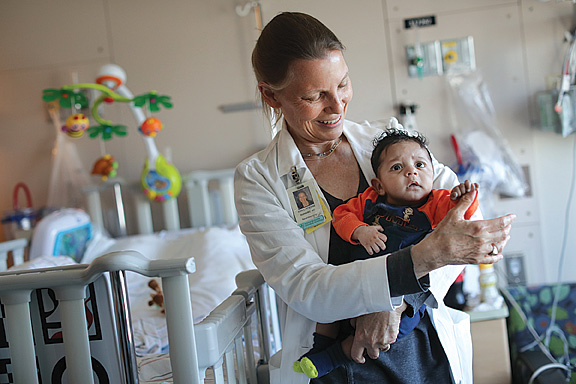 Hospitals use a lot of energy—“It’s like having a warehouse full of refrigerators. They’re always on.” On top of that, green building practices are not prioritized by hospitals and other healthcare facilities, Duhaime notes. The attitude is, she says, “We’re helping people. We don’t need to think about the environment.” The U.S. healthcare system is responsible for between 7 and 10 percent of national greenhouse emissions, according to studies cited by the American Medical Association and the Public Library of Science. (To put this in perspective, England’s healthcare system is responsible for about 3 percent of its greenhouse emissions.)

The more Duhaime thought about this issue, the more concerned she became. In her 40s, she even considered quitting medicine and changing careers. She sought advice from Brown environmental studies chair Harold Ward. “The biggest way to make an environmental difference now,” he told her, “is to see if you can do so within your field.”

Duhaime’s opportunity came in 2015, when she landed a Radcliffe Institute fellowship to create a test case for a green children’s hospital. The questions she posed were: “Could you create a prototype where the care is just as good, but the energy utilization is lower? And could you make it attractive and appealing to people, whether they were interested in climate change or not?”

She built a strong case for green buildings and even concluded that indoor gardens, for example, can create better indoor air quality and lower toxicity for patients and workers while lowering air filtration costs. While this finding may seem intuitive to some, it was a challenge to present the data to hospital leaders in a way that would be compelling to them. “I’m at a very conservative institution,” Duhaime says. “It’s an old hospital. But it’s done remarkably better than I expected.”

Another of her findings was that the more the senses can be engaged by nature, the more calming is the effect. She would like to be able to evolve a design, for example, that would allow young patients to hear the rustle of leaves through a barrier porous enough to let sound leak through but keep pollen out.

Mass General has agreed to let her spend one day a week working on these innovations with a team she has assembled. “The hospital hasn’t committed to building the prototype yet,” she says, “but it’s gone a lot further than I thought in a very short time. And it’s being seriously considered.”

Reader Responses to Letting in Nature