Growing up, Emily Arnold McCully ’61 was a voracious reader who adored Alice’s Adventures in Wonderland and Mary Poppins. But she quickly became interested in books with male protagonists, including sports novels by John R. Tunis and adventure stories by Howard Pease. “I had to start reading books about boys who did interesting or brave things, because there just weren’t many like that about girls,” she says. 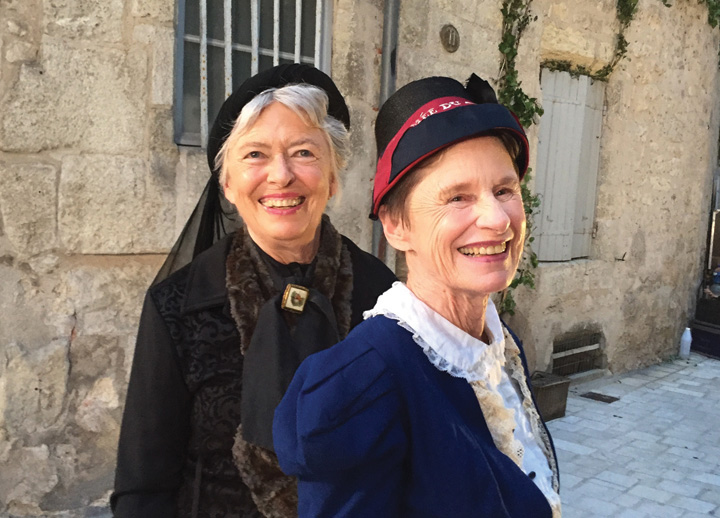 Michael Stanish
Emily Arnold McCully ‘61, right, and Elizabeth Diggs ‘61, on the Mirette set in Périgueux, France. They were both extras in the film, currently scheduled for a Christmas 2017 release.

As an acclaimed author and illustrator of more than a hundred books for children, McCully has helped address that problem. Much of her work features daring females—both real and imaginary—such as Mirette on the High Wire, about a girl in nineteenth-century Paris who learns how to walk a tightrope. That book, which the New York Times called “exuberant and uplifting,” won the 1993 Caldecott Medal. Over the years, McCully has received plenty of such accolades: the Washington Post named her biography of pioneering journalist Ida Tarbell one of the best books for kids in 2014, while The Escape of Oney Judge: Martha Washington’s Slave Finds Freedom earned the 2008 Jane Addams award.

Her latest picture book—Caroline’s Comets, about nineteenth-century astronomer Caroline Herschel—received starred reviews from Kirkus and Booklist earlier this year. McCully says she hopes her books inspire young readers to make their own mark. “I want girls to realize what their potential is,” she says, “and to use it in the world.”

Born in Illinois and raised on Long Island, McCully was always penning short stories and doodling as a young girl. She concentrated in art history at Brown, where she also acted in plays and cowrote a school musical. After college, she worked at a New York City advertising agency and began putting together a collection of drawings and designs. “This was the Mad Men era, but the men were actually kind to me,” she recalls. “They let me take type samples and play around with them.”

McCully quit advertising to pursue a master’s in art history at Columbia, but she was also starting to show her portfolio to art directors at magazines and to book publishers. But it was a subway poster she’d done in 1966 for a New York City radio station that caught the eye of an editor and prompted him to commission McCully to illustrate a children’s book. Other commissions followed, which forced McCully, a self-taught artist, to broaden her skills. She completed the illustrations for Mirette in pen and ink, for example, before the publisher decided the illustrations should be paintings. “But I didn’t actually know how to paint,” she recalls. “I had to play around with it for a long time before I felt confident.”

More than fifty years later, McCully continues to broaden her work. A Promising Life, a young adult book about the son of Sacagawea, was released in July. And she’s finishing up a volume for middle-schoolers containing biographies and portraits of twenty-one lesser-known women, including Shirley Chisholm, the first African American woman in the U.S. House of Representatives, and Sesame Street cocreator Joan Ganz Cooney, due out next year.

“I love history,” McCully says, “and the older I get the more I love it, and the more important I think it is. I’m on a little mission to make history interesting—and to get it right.”