Nimo Ismail ’21 proudly marched through the Van Wickle Gates during the 254th convocation on September 5th. “I keep thinking about the next time I’m going to pass through the Gates—how much I’ll have accomplished,” said Ismail, an Ohio native who had the honor of holding the Brown banner.  Augustus Kmetz  ’21  took in the scene with a grin.  “I am just incredibly excited, I had no idea that I would be here. I’m from Oklahoma. We don’t travel that far,” Kmetz said. “I already love Brown so much.” Meanwhile, two former Marines, Aimee Chartier and her husband, Joel Fudge, prepared to enter the University as Resumed Undergraduate Education scholars. “Growing up in Rhode Island I always wanted to go to Brown,” Chartier said. “And this is it, the defining moment. I won’t get to walk through the Gates again until I graduate.” From the sidelines, Michelle Gibson took videos of the procession, trying to get a glimpse of her daughter Jasmine Gibson ’21, a Program in Liberal Medical Education student from Atlanta. “Her dreams are becoming a reality,” Gibson said. Welcoming the students, President Christina Paxson addressed the country’s political and social tensions. That day, the Trump administration had formally repealed the Deferred Action for Childhood Arrivals (DACA) program. “Make no mistake,” Paxson said, “Brown will support our DACA and undocumented students!” Then she wove it into her speech. “We want to teach you not just how to acquire knowledge, but also how to use it to bring people together and create solutions.” 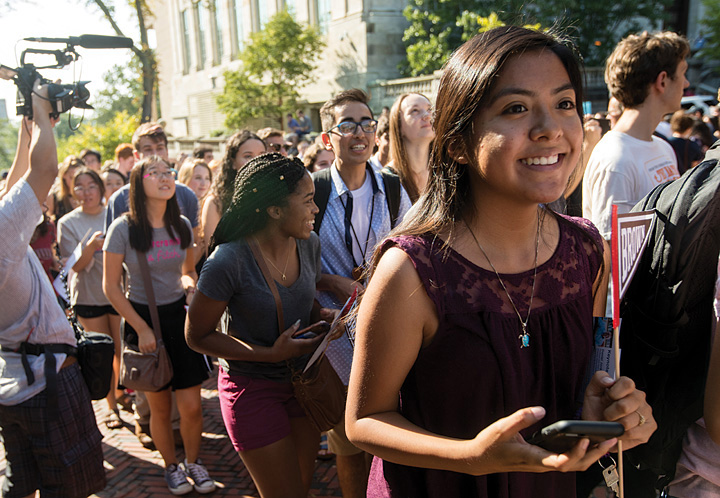