“You have to be ruthless,” Grammy Award–winning singer and songwriter Rosanne Cash told four songwriting students who took the stage one by one in the Granoff Center’s Martinez auditorium October 4. If your favorite line doesn’t work within the structure and rhyme pattern of a song, Cash said—kiss it goodbye. That advice was about the most ruthless part of an otherwise very encouraging songwriting master class and performance by Cash, the daughter of country legend Johnny Cash, and her husband John Leventhal, also an award-winning songwriter. The River, an album they co-wrote, won three Grammys in 2015. 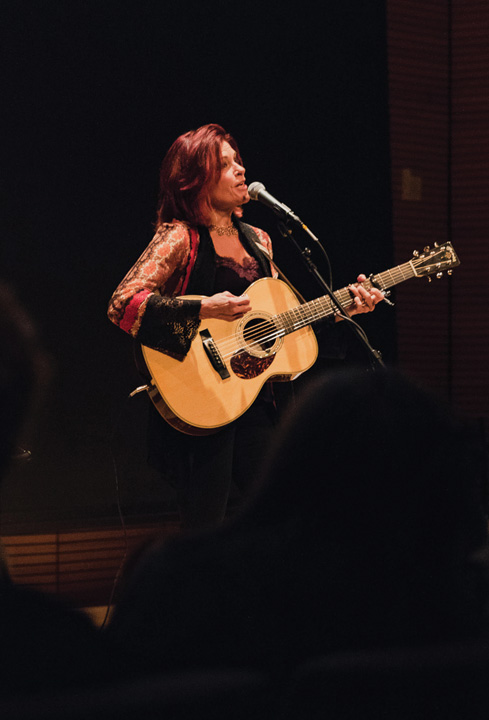 Victor Isaac Alvarez '19
Four songwriting students got feedback from Cash and husband John Leventhal—then were treated to a live performance by the pair.

Cash and Leventhal were the first in a new songwriting series featuring acclaimed musical artists, sponsored by the Brown Arts Initiative. The couple performed a few songs from their latest album, then brought the four songwriting students—two Brown undergrads, a high-school senior, and a local Providence singer-songwriter, chosen through auditions—up onstage to perform original works to be critiqued. Afterwards, Cash and Leventhal played more old and new songs, including Cash’s 1981 hit single, “Seven Year Ache,” and “Ode to Billie Joe” by Bobbie Gentry, one of their favorite examples of great songwriting.

Jamie Atschinow ’20 accompanied herself on the ukulele and got props for her beautiful voice. She made a small error and corrected herself. Afterwards, Cash told her not to correct mistakes while performing. “Did you own the stage?” Cash said. “That’s all that matters.” Madeleine Olson ’18 got the compliment of the night when Cash told her, regarding a lyric in her song “Essex Street”:  “I’m actually jealous of this line.”

The concert took place a few days after Cash had published an op-ed in the New York Times about the Las Vegas massacre, in which she encouraged country artists to speak out in favor of gun control and against the NRA—even though she’s received death threats for doing so. “Find the strength of moral conviction, even if it comes with a price tag, which it will,” she wrote.  She mentioned the subject at the start of her appearance at Brown. “This horrific event happened in my shared office space of music festivals,” said Cash, explaining why this shooting felt particularly personal. “People say, ‘You should just shut up and sing,” she added. “By the way, that’s anatomically impossible.”

Reader Responses to “Own the Stage”