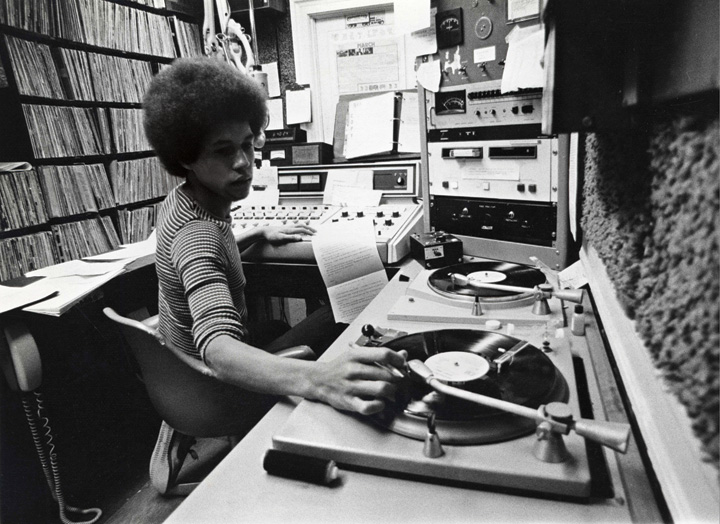 Brown Archives
A DJ works the turntables at WBRU in 1975. The station has had an
FM signal since the 1960s, but is now transitioning to streaming only.

“This is where Nirvana posed for a photo,” Breuer told a group of rapt new students, gesturing towards the big gold 95.5 numbers on the white wall, a reference to what had for decades been the station’s FM signal. “They also signed the inside of the bathroom but then someone painted over it,” Breuer added.

For decades since its creation in 1936—and especially after converting to FM in the 1960s—WBRU has been a cornerstone of the Providence music scene. The station developed a reputation for finding talented alternative rock bands before they hit it big. From 1993 to 1995, Rolling Stone readers voted BRU the best radio station in the country. For students, BRU became a gateway into the music world.

“Working on WBRU launched me into a place where the entire music business knew who I was,” says Patti Galluzzi ’83, who worked at the station and went on to become a senior vice president of MTV. “Bands come to Providence because BRU plays them on the radio and promotes their shows. Having the [FM] signal is what makes WBRU what it is.”

But as of September 1, listeners tuning into 95.5 FM no longer heard WBRU. Earlier this year, following a recommendation from its student board of directors, BRU’s student station members voted to sell the signal after years of struggling with financial burdens, lack of student engagement, and the declining popularity of the radio format itself. The fact that the signal went to K-Love, a Christian rock station, might have caused Cobain to roll over in his grave.

“We see no other viable options,” wrote WBRU’s general manager, Kishanee Haththotuwegama ’19, in a letter to alumni about the sale. “We’re also faced with the reality that broadcast radio may not be the most engaging content distribution technology for the student workshop in the 21st century.”

Over the last ten years the station has seen its revenue consistently decrease, and last year it ran a significant deficit.“I think it’s not a secret that the radio business and the Providence market are deteriorating substantially and the chances of the station surviving in the long run were very small,” Peter Tannenwald ’64, a former long time board member and the station’s lawyer, told the BAM.

The decision to sell, however, came with significant controversy—a turnaround plan put together by alumni in the months leading up to the sale vote failed to persuade the board and a majority of the students. The University could not intervene, as WBRU is owned by the independent nonprofit Brown Broadcasting Services. In the aftermath, BRU station member Tucker Hamilton ’17 filed a suit against Brown Broadcasting Services over the sale of the station. In an interview with local online news site, Hamilton alleged verbal “intimidation” in the student meetings to pressure a pro-sale vote.

Other alumni, like Galluzzi, don’t think station members gave enough consideration to alternatives to the signal sale. To them, giving up the FM signal means stripping BRU of its fundamental identity, severing the station from the Providence community and music scene. “I put in 30 hours a week for four years without pay for a station that would be handed on from generation to generation,” says Bill Lichtenstein ’78, who has started the website Save WBRU.  “Not for one group to just say ‘We’re going to sell it.’”

However, according to Haththotuwegama, actually following through with the proposed turnaround plan—or any other—would have meant heightened pressure for an already depleted student volunteer group to meet increasingly ambitious sales targets. Preserving the signal, she says, would have prevented students from developing a digital format and taking on other creative projects. There simply wasn’t enough time or resources for the station to do both.

“Under the turnaround plan, the student experience would have been severely limited,” Haththotuwegama told the BAM. She stressed that the organization is “still being driven by the same mission” to give students an educational media workshop experience that provides content for the Providence community.

“This is really about bushwhacking and trailblazing,” says Jon Klein ’80, a former president of CNN who once worked at BRU. “These students understand what all the great communicators have always understood: what’s most important is the content and not the signal itself.”

According to Haththotuwegama, the station will place profits earned from the signal’s sale in a fund and use the interest to sustain the station. Current members are in the midst of gearing WBRU to adapt to an exclusively digital platform that will host two 24/7 streaming sites. Such station staples as the “360 Degree Experience in Sound,” devoted to hip-hop and R&B, will now be able to play seven days a weeks online instead of only on Sundays. A comprehensive app update is in the works, too, something no one had time to do before the sale.

“We have a lot more freedom right now,” says Andie Corban ’19, director of the news department. “We have a lot more opportunity to experiment and finally do things we have wanted to do for a long time but haven’t been able to do.”

Corban says that when the station was tied to the radio format, her department had to focus all its energy on putting out a daily newscast. Freed from the constraints of limited radio airtime, her team is now developing a long-form podcast.

While WBRU alums and Brown students might not agree on the sale of the station’s signal, everyone, from FM diehards to streaming proponents, expressed their love of BRU as a place for student learning. Memories of late-night DJ sessions, bungled interviews, and the thrill of being on air—it all came back to that.

“Change is never palatable because people think about what [WBRU] was, what it was for them,” says Caroline Giegerich ’00, who used to work on the station and is helping with the digital transition. “But those students know what’s right for them. Did I always agree with what they were doing? No. But I’m not them, and they’re the ones who have to run the thing.”