So have you heard the one about the 49-year-old best-selling author who gets an unsolicited email about his family tree and decides to embark on a year-long journey to learn everything he can about his own genealogy—and ours? If you want to learn the punchline, and if you’re the kind of reader who likes to learn everything you can about a topic like genetics with your factoids swimming atop a sea of rapid-fire Henny Youngmanesque comedic monologue, then you were born to read It’s All Relative, the latest from A.J. Jacobs ’90. 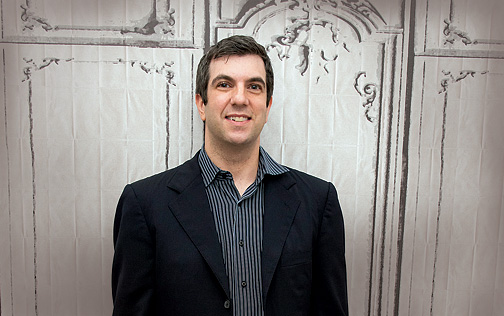 Mike Pont
Immersing himself in the $55-billion-a-year genealogy business, A.J. Jacobs '90 found out that he's related to Barack Obama.

Whether due to nature or nurture, Jacobs, an Esquire editor-at-large, has carved out a niche as the king of what’s been dubbed “immersion journalism” or “lifestyle experiments.” His previous efforts included reading all 32 volumes of the Encyclopedia Britannica for The Know-It-All and trying to follow for an entire year only the edicts of the Good Book (including, apparently, stoning adulterers) during the writing of The Year of Living Biblically.

That museum—and the growing cottage industry, some of it hucksterish and some of it sincere, seeking to profit off people’s obsession with ancestry—offers a lot of space for a self-absorbed writer like Jacobs. He takes in a genealogy convention in upstate New York, visits the massive hillbilly-flavored Lilly family reunion in West Virginia, and talks with the pioneers who are working the latest breakthroughs in DNA and gene technology. And of course he uses family as a jumping off point for his bottomless stand-up routine about such relatives as his third great-uncle Solomon Kingsbaker, who was known for his 1904 newspaper testimonial for hemorrhoid cream, and Barack Obama—Jacobs’s fifth great-aunt’s husband’s brother’s wife’s seventh-great nephew.

This is the ultimate question raised by It’s All Relative and ancestry websites generally: who aren’t we related to? Jacobs’s curiosity is piqued by genealogy guru Randy Schoenberg, who, using online tools to link 70 million folks into one family tree, aims to connect us all, telling Jacobs “it’s like six degrees of Kevin Bacon, but everybody’s Kevin Bacon.” Exactly.

For this non-genealogy buff reviewer, what’s interesting about ancestry is what’s unique—knowing, for example, that Obama is also my cousin, not because of a computer run but because of a colorful shared ancestor, Bradley Bunch, who was (bizarrely) a Confederate leader in Arkansas; the bland reality that we’re practically all cousins makes that knowledge a little less interesting.

The bottom line, as sung by Sister Sledge, who ultimately performs at Jacobs’s giant Global Family Reunion, is that “We Are Family”—all of us. At a moment when America and the world seem riven by strife, that manages to be both comforting and insipid at the same time.

Reader Responses to Related to Everybody