I’ve always been a bit of a dork, very interested in trivia, learning fun facts says David Kleinman '20. I’ve got a book—and it’s a very pompous name, I don’t support the name—The Superior Person’s Book of Words. It’s literally just a dictionary of obscure words and their etymologies. So that sort of started me on the path of learning interesting facts. 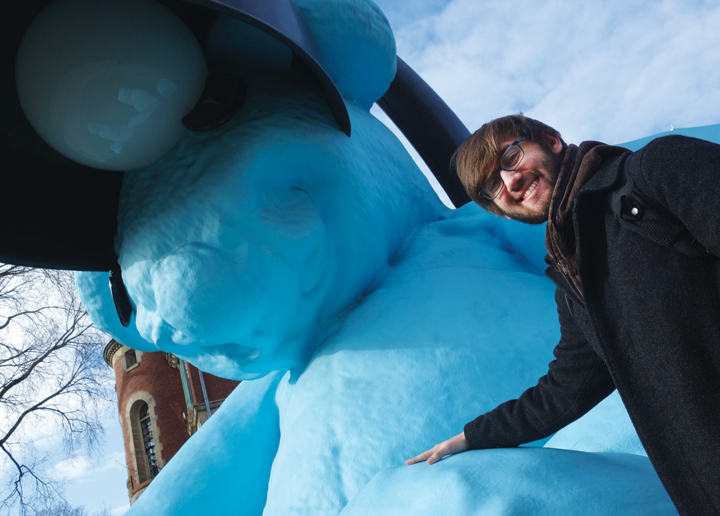 My family has been a very much “enjoying Jeopardy!” family. You always get a sense when you’re watching, “Oh I could do that, I know that.” When I saw that they were doing the online tests over the summer, I signed up on the spot.

They don’t tell you how you do. But in October, I got an email saying, “Hey, we’re going to be doing auditions in Boston. You did well enough on the test to attend.” I absolutely flipped out. I shot up, looked at my roommate with this incredulous look, and said, “Bro! I’m gonna go audition for Jeopardy!” And I ran about my room very excitedly. I understood that the audition doesn’t mean getting on. Still, it was all I could do not to scream it from the heavens.

The contestant pool is kept for 18 months. Any time in the next year and a half, they might call me or email me and say, “Do you want to be on the show?”

Am I remaining calm? Not in the slightest. They sent a holiday email just advertising some Jeopardy!-themed gifts and I flipped out again. I had a nightmare the other night that the whole thing was a scam. I woke up in a cold sweat.

In high school, I did this thing called WGBH’s High School Quiz Show. My team lost immediately. I chalk it up to the buzzers. It sounds like a cheap cop-out but really a lot of it is in the buzzer technique. You can know everything but if you don’t get a chance to say it, you’ll lose. If you buzz too early, you're locked out. You gotta keep your cool but also be on edge at all times.

Kleinman’s skill set: “I’ve been coasting on my vocabulary and the trivia I’ve amassed over time. I’m up to snuff on my science as far as I know, but sports trivia? I definitely need to bone up on that. I know stuff about the Red Sox and that’s about it.

My major is as yet undeclared, but I believe I’m going to declare English and theater studies. I’m really interested in studying literature and also studying performance and performing. So in addition to the knowledge aspect of Jeopardy! I’m drawn to the sheer acting aspect of performing this game in front of the camera.”

Reader Responses to Waiting for Trebek