After years of mostly laboring in television writers’ rooms, Angela Robinson ’92 wrote and directed the independent film Professor Marston and the Wonder Women, which was released in October to strong reviews. The film explores how the life, politics, and fantasies of William Moulton Marston fueled the Harvard-educated psychologist’s creation of Wonder Woman in 1941. Marston lived with two women: his wife, the psychologist Elizabeth Marston, and his onetime student Olive Byrne. The film celebrates their relationship as polyamorous, anchored by a lesbian romance between Elizabeth and Olive, who lived together for decades after Marston’s death.

How did your experiences as a Brown concentrator in theatre arts and performance studies shape your career? 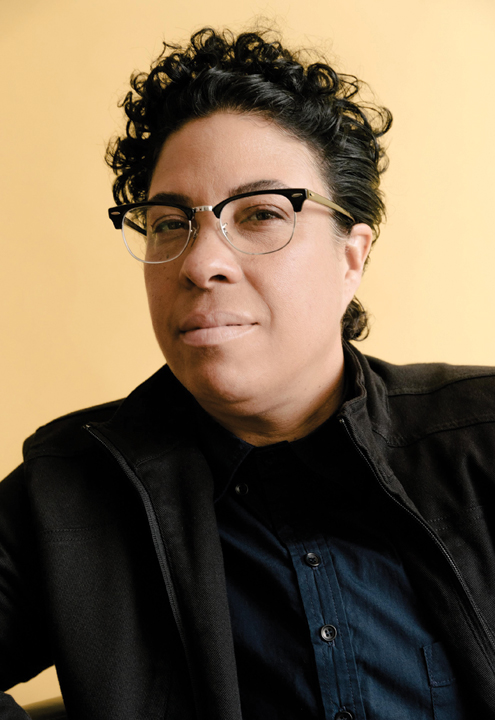 I got really involved in Brown theater. As a sophomore, I finally got a play to direct—a musical, Little Shop of Horrors. I directed around 12 plays—In the Boom Boom Room, For Colored Girls..., The Well of Horniness. What I remember most is the opportunity to form my craft and vision and voice. There was this kind of merging of identity politics and theater and expression. I feel like I’m still drawing from the same well today.

You’re a triple minority—female, black, lesbian. How have these identities helped or hurt you in Hollywood?
For such a liberal place, it’s really conservative. How it has helped is that I’m so kind of out-of-the-box that I’m not easily put in a box.

Many of the television series you’ve worked on—The L Word, Hung, True Blood—were boundary-pushing. What were your contributions?
I was really interested in exploring the landscape of race and sexuality and gender…but in a pop culture context.

What about the character of Wonder Woman touched you?
I really loved Wonder Woman ever since I was a kid because she was the only girl. [When] I directed my first feature [D.E.B.S.], one of the actors gave me a history of Wonder Woman. And in the book there was a chapter on the Marstons—and that blew my mind.

Because he lived with two women?
The thing that really struck me was that there was this really unconventional love story at the core of Wonder Woman, but also that they invented the lie-detector test, that they were early psychologists, and that they made Wonder Woman to be psychological propaganda—to try to change hearts and minds, so that boys and men would learn to respect powerful women.

You often use the pronoun “they” when you talk about the origins of Wonder Woman.
He was inspired by their polyamorous relationship.Their ideas about human behavior and feminism really found a way into the comic book. Marston has gotten a lot of credit, but I feel that Elizabeth and Olive were very influential. So part of what I wanted to do was acknowledge and re-introduce their contribution into the narrative.

How do you get the world to work together, and fast, to get all of humanity vaccinated against COVID?
Humanities & Culture

Meet seven of the many exemplary students who thrived—and graduated—despite the pandemic.
Education

Anani Dzidzienyo’s presence was healing; his scholarship, groundbreaking. You could say the same about the class created in his memory.