It’s a Bear’s Life
The first woman to become Bruno. 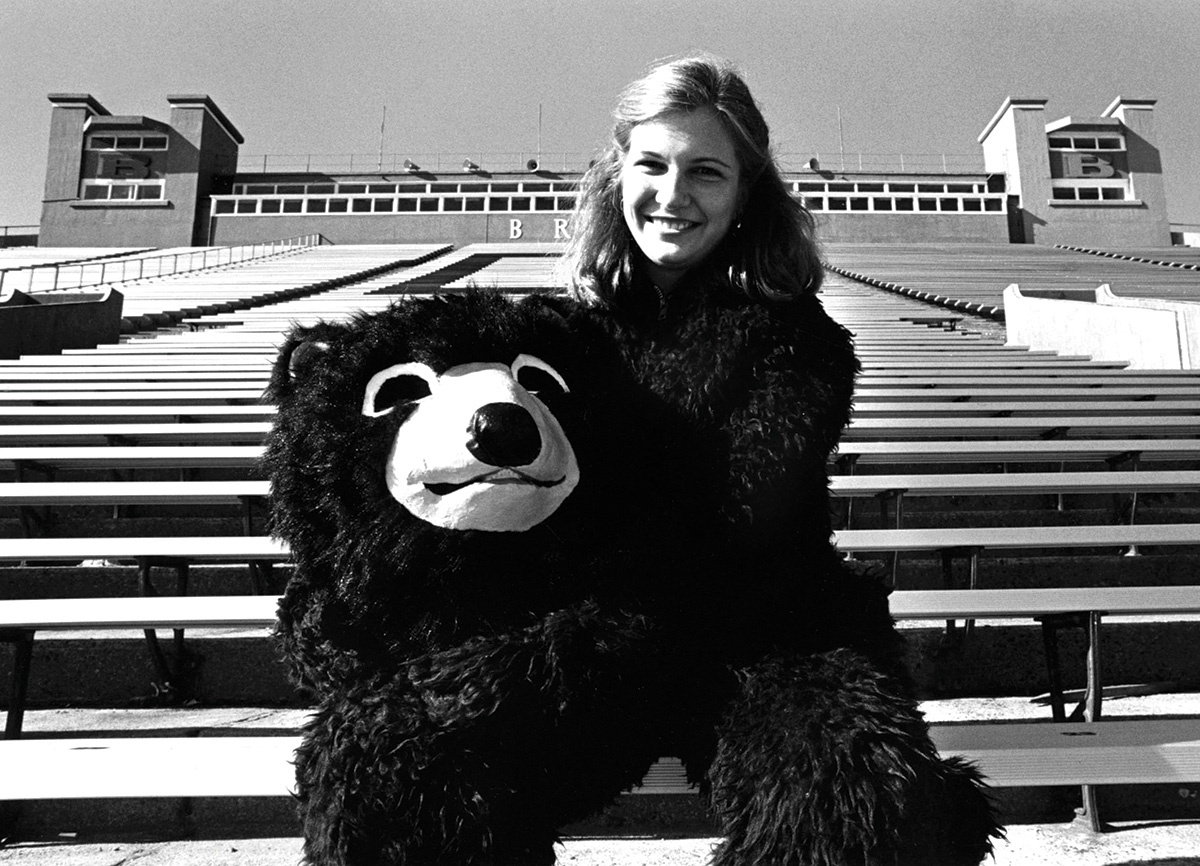 Barbara Weiss Kimmel ’83 was shy in real life. But after donning the Brown Bear suit, suddenly she was sitting on laps and dancing with everyone as the life of the football games.

In the spring of 1980, I became Brown’s first female bear. No one was more surprised than I that I was picked at the tryouts. I didn’t even know where the stadium was. The day after my selection the Brown Daily Herald covered it with a story headlined “A Bear with Barrettes.”

Once the initial shock and excitement faded, I had questions. What was the Bear supposed to do? Where would I stay at away games? (The previous—male—bear traveled with the football team.) And then I put on the bear suit, which was as hot and bulky as a 1960s chocolate brown shag carpet. At the end of each season, it had to be dry-cleaned; the cleaners on Thayer Street charged me for a rug cleaning. The suit covered me from neck to sneakers to fingertips, with a hidden zipper in front for bathroom visits. (During my senior year, the Brown Band helped pay for a Disney designer to make a lighter costume with a motorized fan in the head.)

The morning of the first game, I couldn’t eat. My whole body shook. I met the band on campus to prepare for the mile-long procession to the stadium. They invited me to travel with them to away games, and the members of this clever, quirky group would become my closest friends. As soon as I donned my costume, sweat formed on my forehead, neck, and back. I could barely see or hear. I doubted that I could last the trek to the stadium. “Stay with me,”  said the drum major who led the procession. “You’ll be fine.”

The drumbeats charged my body. My natural shyness began to recede as I picked up the rhythm in my step, jumping at the crash of cymbals. I marched, skipped, danced, and waved to fans. When we entered the stadium, cheerleaders ran to hug me like long-lost friends. When the band, now seated in the stands, started up again, I danced—with boys, with girls, or by myself. Incognito, I became free and uninhibited, thriving on the noise and energy around me.

The first few games were exhausting, as I ran, danced, and climbed stadium steps. I soon learned that substituting grand gestures for physical movement was less tiring and just as effective. I covered my eyes and shook my head side to side when the other team scored. I huddled with game officials, who called me “Smokey.”

Off the field, little girls waited for bear hugs and stickers. I posed for pictures with students and alumni. What a relief for my aching cheeks when I realized I didn’t have to smile for photos: the bear had a permanent grin. I led a parade arm-in-arm with Providence Mayor Buddy Cianci and was featured in a Providence Journal story about mascots. I even had a “blind” date in New York City with the student dressed as the Columbia Lion based on the fun we had romping around the Brown field together.

There were difficult times. Sweaty, hot days or rainy games that had me constantly wringing out my paws. Pre-pubescent boys kicked me. My costume frightened some children to tears. Suddenly Barbara the introvert was sitting on strangers’ laps, standing behind football players to mimic them, or dancing in front of thousands. Walking through the stands, I’d see strangers’ faces light up. A few people knew me as Barbara, but on game days I was The Bear.

One year I gave my mother, who’d flown up  for Parent’s Weekend, a thrill she never forgot. At the football game, Mom leaned in and whispered into one of the mask’s eye openings: “Barbara, I want to be the Bear. Just for a little bit. Please.”

Mom, who thrives on eccentric adventures and craves attention, will try anything. I knew this was a bad idea. “Sure,” I said.

We made the switch in a handicapped stall in the women’s room. I rolled the bear legs up on her small frame and crowned her with the head. Then I started to worry. What if she tripped and got hurt? Mom shuffled down the steps to the football field. Out of costume now, I joined Dad in the bleachers and pointed to the field. He just shook his head and muttered, “That Joan.”

My little Jewish mother, in my bear suit, was on the sidelines dancing with cheerleaders in front of thousands. After a few minutes, she lumbered up the stairs, and we went back into the bathroom for the switch. “I got scared,” she said, breathing heavily. Her hair was soaked and mascara ran down her face. “One of the cheerleaders asked, ‘Is that you, Barbara?’ I think they knew I wasn’t you.”

Decades later, at 80 years old, Mom was still telling everyone that “being the Bear was the thrill of my life, a dream come true.”