Supreme Perspective
Sonia Sotomayor tells students to listen to those with opposite views. 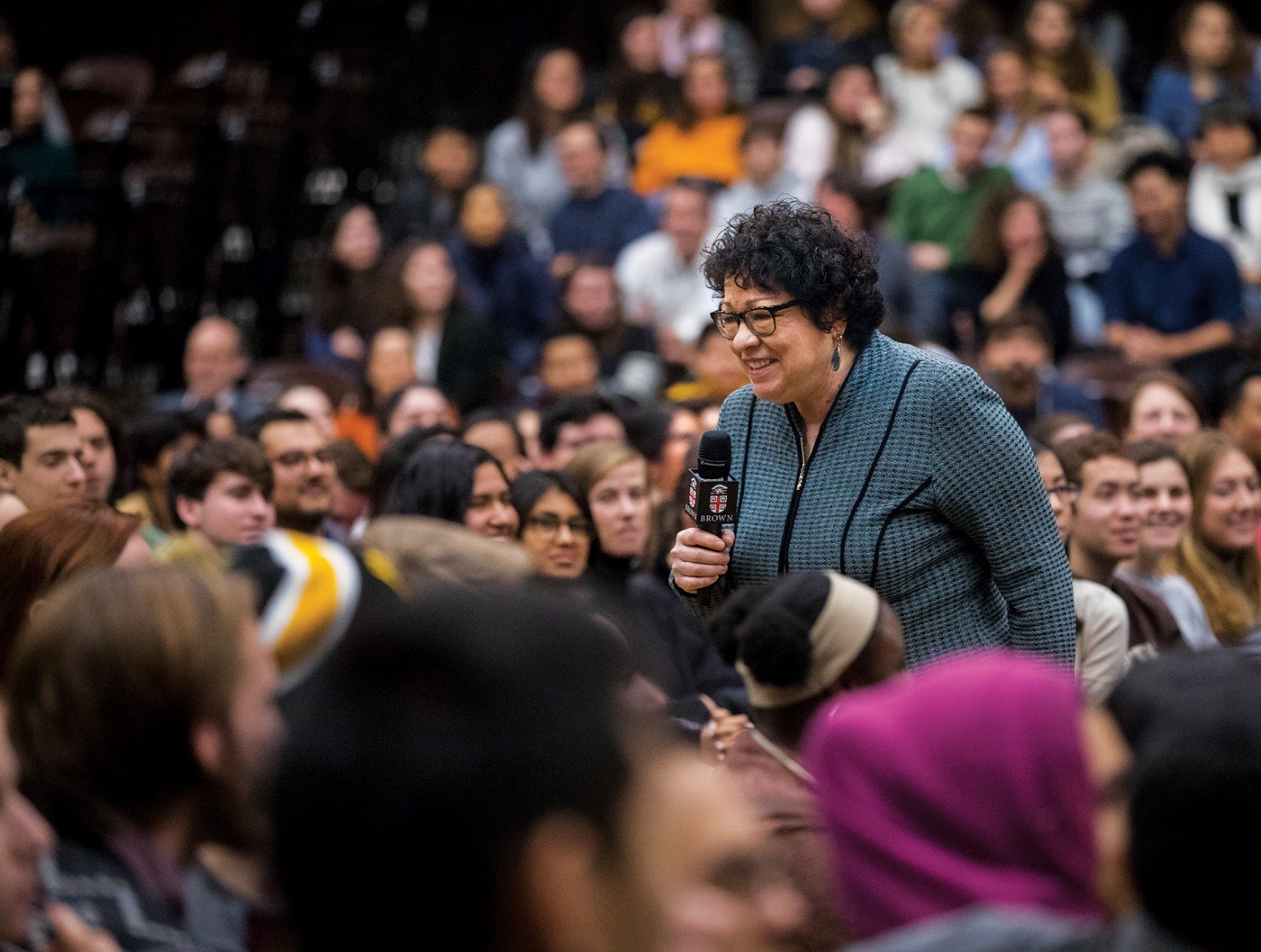 Justice Sotomayor walked among Brown students as she spoke about her life.Photo: Nick Dentamaro

On February 7, the Class of 2020 got a chance to hear U.S. Supreme Court Justice Sonia Sotomayor’s life story in person. They already knew it well—from her childhood in the Bronx to becoming the first Latina on the Supreme Court—after reading her memoir, My Beloved World, as first-year students taking part in the Brown’s First Readings program.

Stepping off the stage to walk among the packed audience at Pizzitola Memorial Sports Center, Sotomayor stressed the importance of “proportionality:” “No matter how things are for you,” she said,  “they’re harder for other people, and if you stick with it you can get around the brick walls in your life.” Her sense of proportion allowed her to avoid getting hung up on her diabetic condition, and she said she tries to bring it into every case she encounters.

Addressing first-generation college students during her visit, Sotomayor said to take pride in their identity: “If someone says you’re only here because of affirmative action, tell them, ‘That may be true, but I’ve earned it, I’ve had to work harder than you.’” Sotomayor told the students that engaged democracy requires listening to people who have different views. “Once you can begin to really understand the principles of what’s important to another person, that’s the beginning of compromise, of serious conversation,” she said, explaining how she engages with her fellow justices. She ended her talk by calling students to action, asking them to work to create a society based on a truly equal sense of justice. “We’re going to need to find a way to equalize the resources we provide in order to equalize people’s rights,” she concluded.

Ted Klein ’69 responded to Justice Sotomayor’s assertion that minority students have to work harder to get where they are. Klein asked, “If affirmative action essentially means holding a prospective applicant to lower standards, how does meeting those reduced standards require harder work?”

While there are exceptions to any generalization about minority students, many minority students have to work harder because they do not enjoy the privileges many white students enjoy. These privileges can include understanding cultural references made by teachers and used in test questions; not having to work after school or provide child care for younger siblings; having quiet space in which to do homework; having teachers with implicit bias that favors them; seeing people who look like them in the roles they want to fill as adults; being encouraged to pursue higher education; not having to learn a new language when starting school; and having well-educated parents who read books about their culture to them in English when they were children, helped them with homework, and paid for enrichment opportunities.

As a public school teacher who has a diverse group of students (White, Latino, Asian, Indian, Native American, African American), I see my minority students struggle to keep up with the white students who have more privileges. Those who succeed do so by working harder than many of my white students.

Later in his letter, Klein describes a white male who worked hard to overcome dyslexia and perform well on an assessment, stating, “He’s someone who really did have to work harder.” People with disabilities certainly have extra challenges. Saying that minority students face extra challenges is not saying that other people don’t; it is recognizing that minority students face challenges that white people don’t.

Ted Klein ’69, with all due respect, needs a refresher course on affirmative action (“Who Works Harder?” What Do You Think? May/June). Affirmative action does not, as he puts it, “essentially mean holding a prospective applicant to lower standards,” and I wish the BAM had not let that claim stand uncontested in his letter. Affirmative action has always meant, all other things being equal, offering opportunity to members of historically disadvantaged groups of people.

Justice Sotomayor, speaking at Brown, warned minority students that someone might say, “You’re only here because of affirmative action” (“Supreme Perspective,” Under the Elms, March/April). Her suggested response: “Tell them, ‘That may be true, but I’ve earned it, I’ve had to work harder than you.’” That’s awfully self-serving.

If affirmative action essentially means holding a prospective applicant to lower standards, how does meeting those reduced standards require harder work? Or maybe she means that once the applicant is actually in college, he or she has to work extra hard merely to keep up with fellow students. That, at least, makes sense.

In 2008, as an appeals court judge, Sotomayor notoriously joined in dismissing—initially without even issuing an opinion, the appeal of 20 white New Haven firefighters who’d been denied expected promotions after scoring higher in exams than black test takers. Later, the Supreme Court, just before she joined, overturned this decision.

One of the white firemen whose appeal Sotomayor rejected was a dyslexic who gave up a second job to spend more time preparing for the exam, took practice tests, and created tapes and flash cards to help him study. He’s someone who really did have to “work harder,” which, when you think about it, is pretty ironic.