Ursus Brownicus
In the old days, bears were not always volunteers. 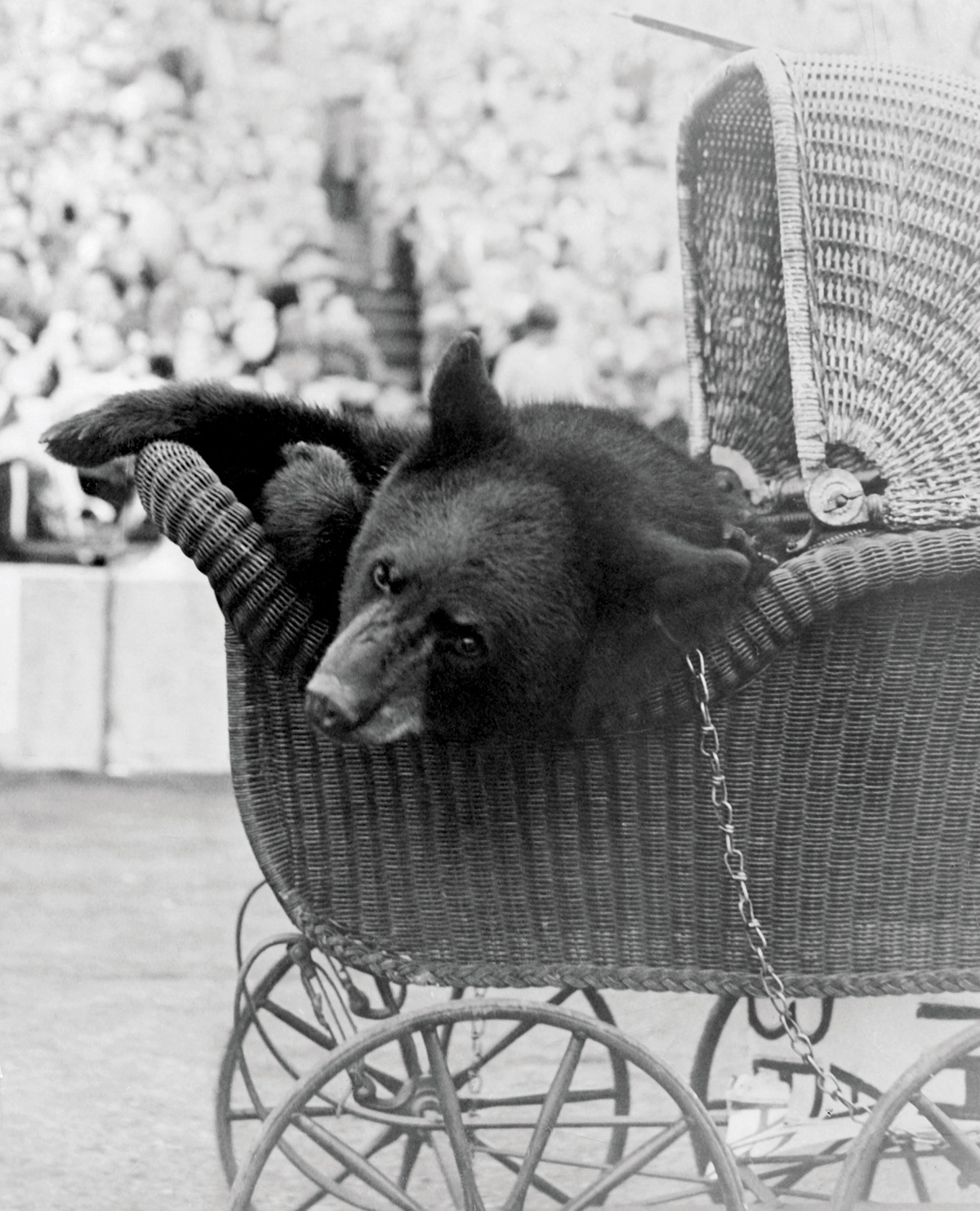 Bruno IX arrived on campus in 1948, 26 years after the first bear cub was recruited as a mascot. Here he’s in a baby carriage at Homecoming, where he enjoyed a bottle of milk. He made an unforgettable appearance at the Thanksgiving Day game, when he landed at halftime in a helicopter, drank a milk toast to the crowd, then headed for retirement at the zoo. 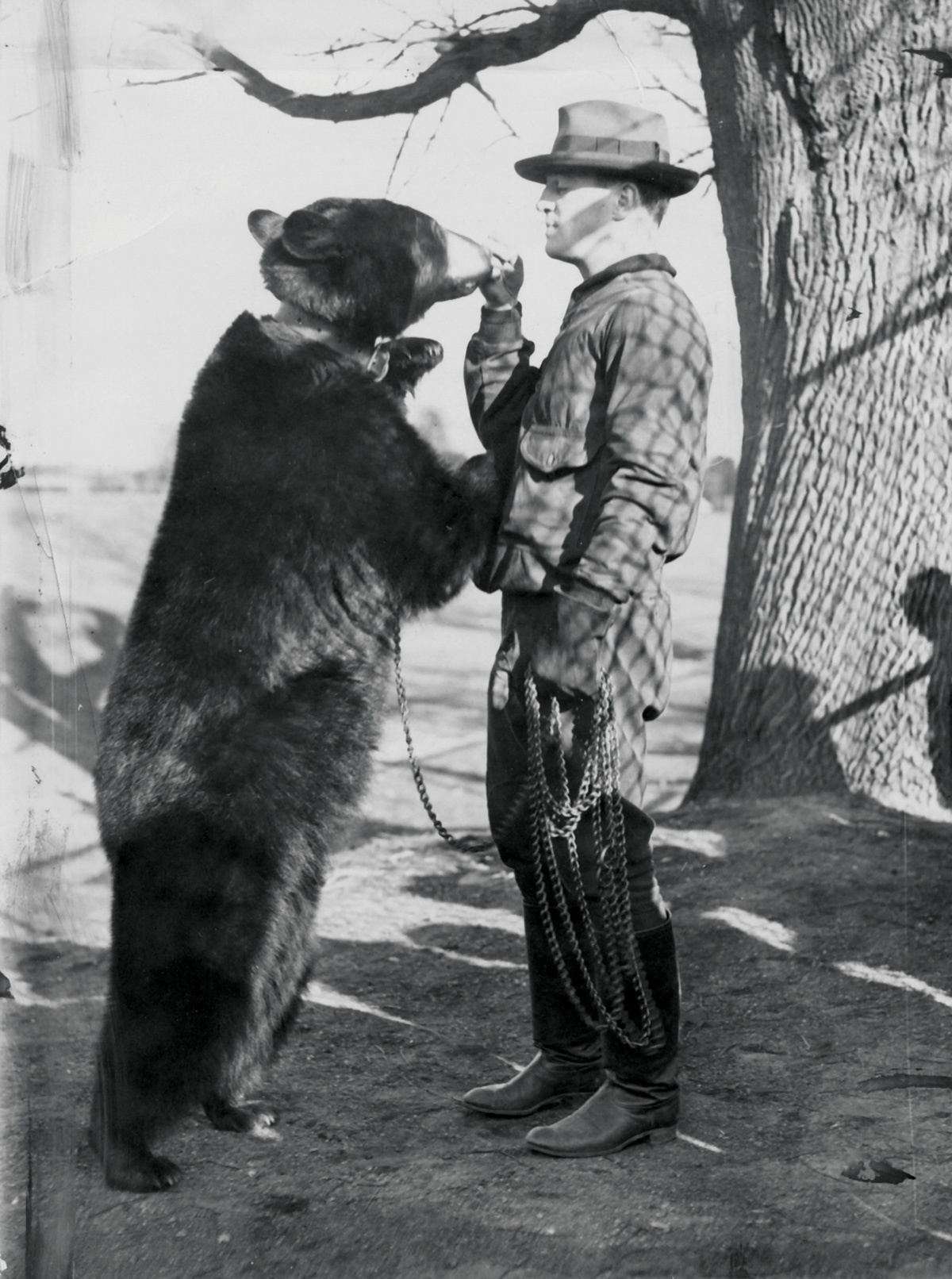 The first live Bruno cub died two months after he got to Brown in 1922, ingesting chemicals that were in his home at Arnold Biology Lab. He was replaced by his sister, Brunonia, pictured here with her handler in 1926. Brunonia performed until 1928, when, 500 pounds and grouchy, she was retired to the Roger Williams Park zoo. 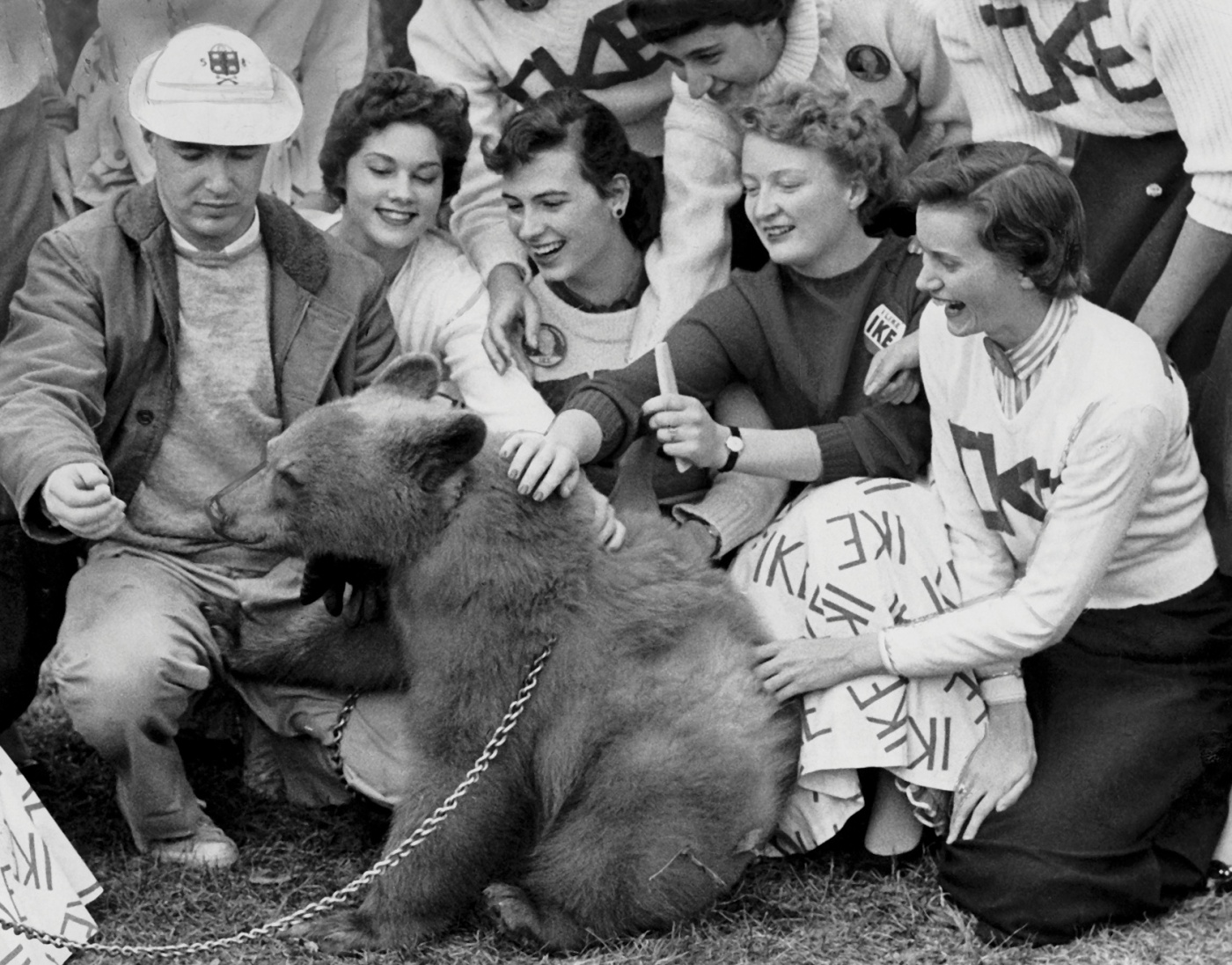 In the presidential election year of 1956, “Ike” supporters from Pembroke posed with Bruno XVII. 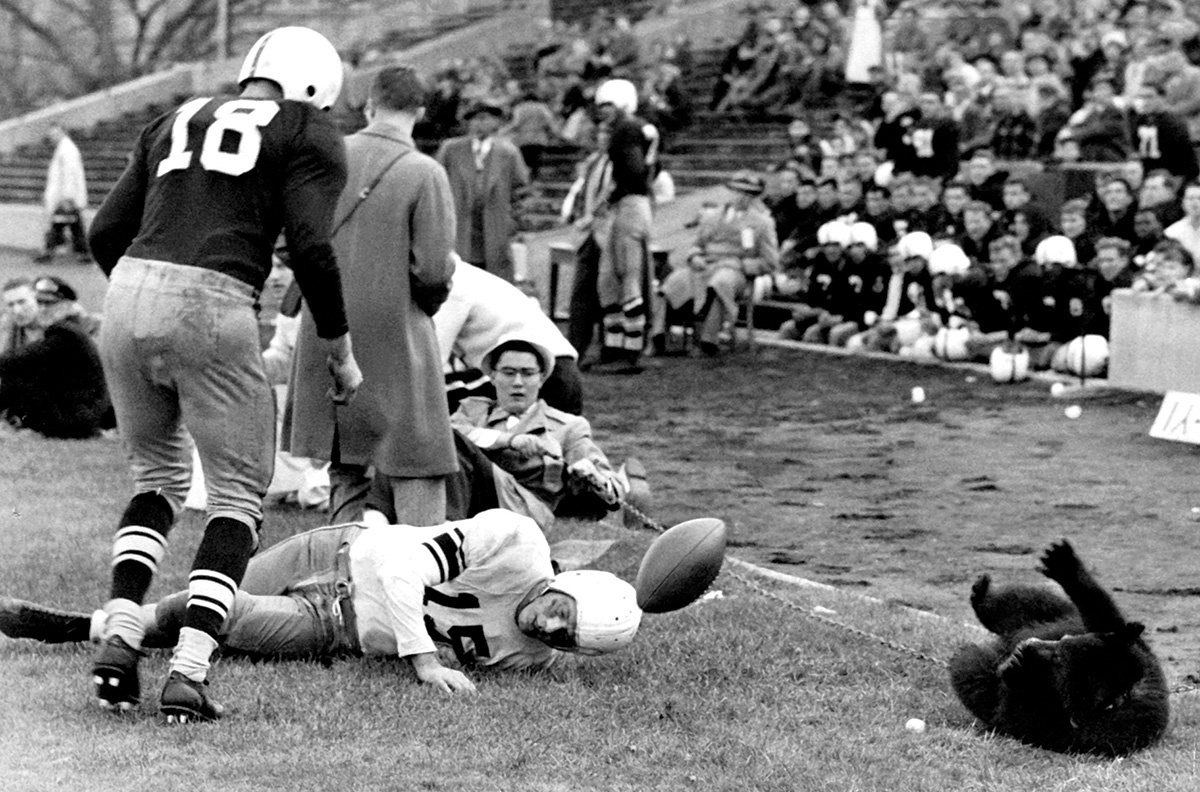 Brown had two mascots in 1950. The first, Bruno XI, was the largest cub in Brown history and was quickly replaced by a “smaller, tamer, more docile” version. This more manageable Bruno is pictured being bowled over in the Brown-Colgate game. 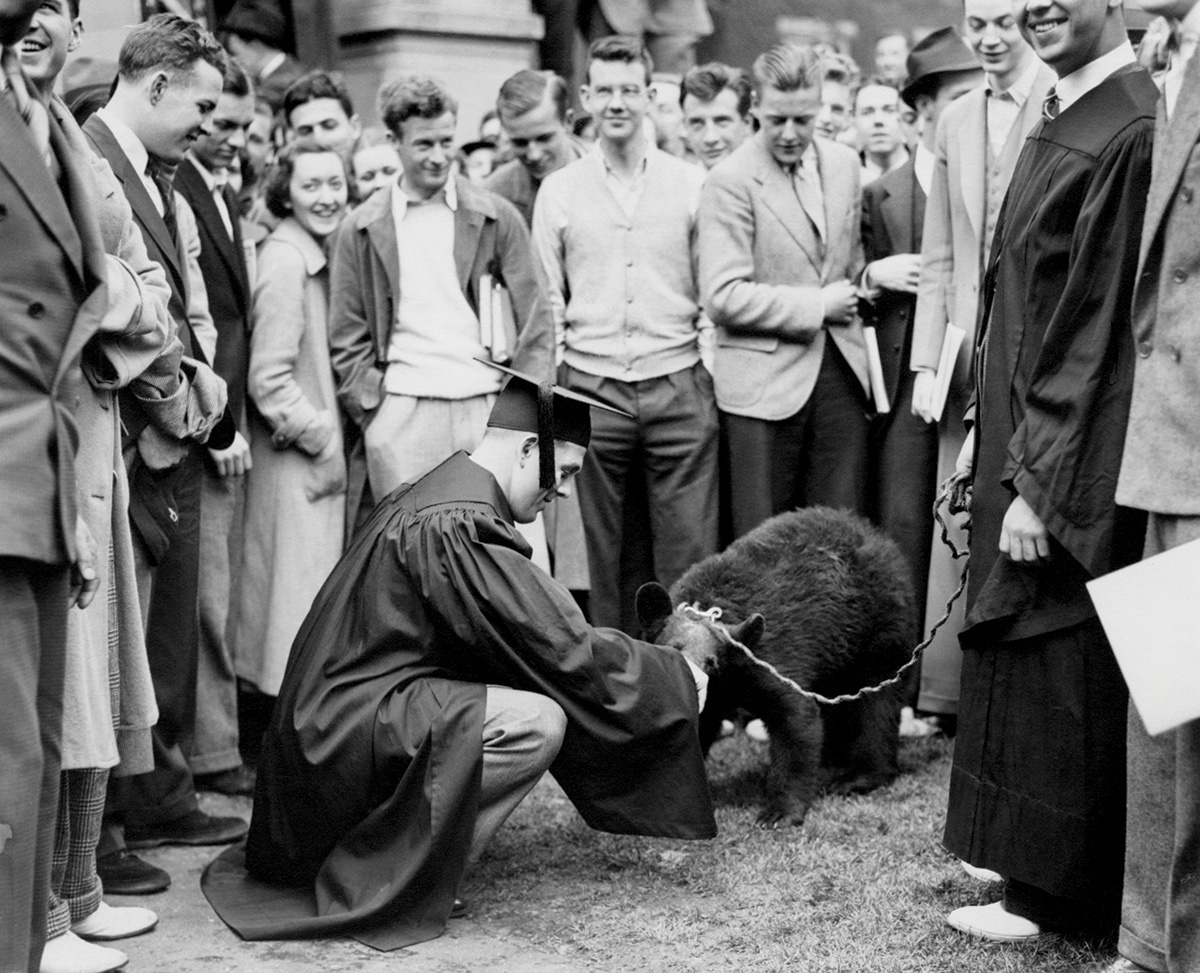 Bruno III, an orphaned cub named Ruthie who was a gift from the governor of Maine, attended the Class of 1936 Spring Day. Ruthie gained national attention at her first football game when she broke loose at halftime and climbed a nearby tree. 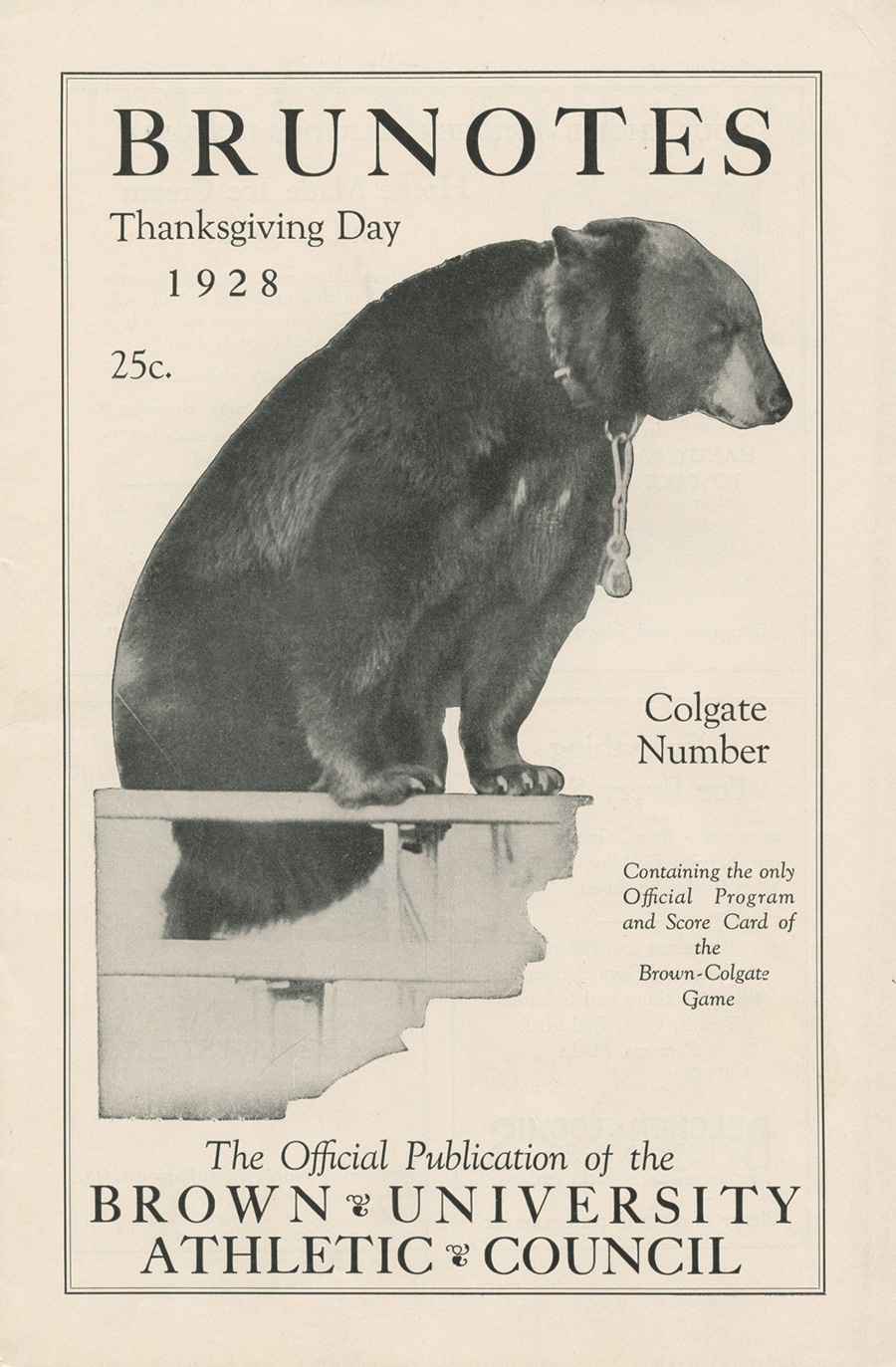 A poster of Brunonia, the second live mascot, in her last year of service.

Captions adapted from The Brown Bear: A History by Peter Mackie ’59.

Thanks for sharing the acccount by Barbara Weiss Kimmel ’83 of her days as Brown’s first female costumed mascot (“It’s A Bear’s Life,” March/April 2018). It speaks to the transformative powers of the Brown Bear. Barbara’s historic appearance follows in the bearprints of Helen, Brown’s first live-bear mascot who stood in for her cagemate Dinks, who refused to leave the cage for the football game with Dartmouth in 1905.

Thanks also for the “Ursus Brownicus” sidebar featuring live bear mascots. The full display can be viewed on the Brown Athletics website, in the Inside Athletics section under History.

—Peter Mackie ’59 Lexington, Mass.  The author is the archivist for the Robinson Collection of Brown Athletics.