Figure It Out!
A biomedical engineering class comes up with marketable answers to real-world problems 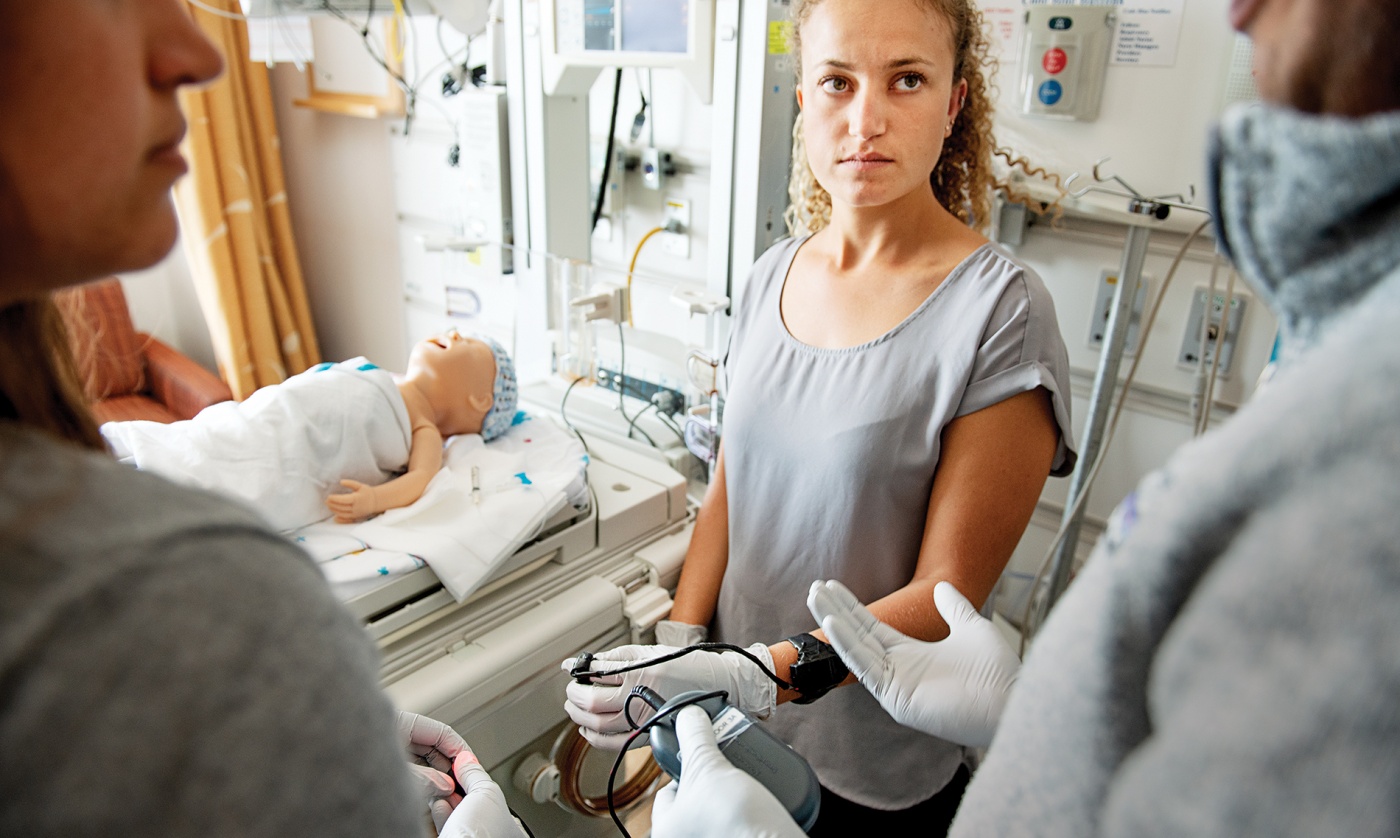 At the top of the 2017-18 academic year, Dr. Neel Sodha, a cardiothoracic surgeon, presented a Brown engineering class with a problem: While cardiac bypass surgeries save countless lives every year, about 10,000 patients annually nationwide suffer subsequent embolic strokes as plaques and other debris travel from the heart to the brain. The filters designed to prevent this, by capturing debris before it exits the heart, aren’t great. So Dr. Sodha, on the faculty of Brown’s Warren Alpert Medical School, told students to invent something better.

A five-student team from the class—a senior capstone course required for all Brown biomedical engineering concentrators—took up the challenge. They designed a new aortic filter, built a prototype, and performed tests on the device’s safety and efficacy. The results suggest that their device, dubbed Embonet, works. The team has filed a provisional patent for its design, which last spring won a first prize at the Johns Hopkins International Healthcare Design Competition. The team hopes to license its idea to a  medical device company.

Very illuminating
Transilluminators, which doctors use to detect veins for blood draws and other procedures, are unwieldy. Doctors are constantly dropping them. So another team in the class devised an idea for a wearable transilluminator that’s easier to use—and that they hope to license to a medical device maker.

“I used to be an architect, so I had this background knowing that there are things that are fixable through design,” said Dr. Ravi D’Cruz, a fellow in neonatal and perinatal medicine at the Brown-affiliated Women and Infants Hospital who advised the student team. “Designers aren’t privy to healthcare problems and people in health care don’t know how to fix them through design. So it’s nice to have a way to bring those two sides together.”

Beyond the classroom
Embonet and the transilluminators are exactly the kind of projects that engineering faculty members Anubhav Tripathi and Celinda Kofron had in mind when they designed the course. The semester begins with a series of presentations by clinicians describing needs. The students then form teams around a particular problem and work for the rest of the semester on a solution. Next year, the class will go from a one-semester course to a full-year requirement.

“The idea was to reach out to practitioners and let them give us the problems,” said Tripathi, a professor in the School of Engineering. “By the end of the semester, we want students to have a proof of concept for a solution and a realistic attempt at a prototype. They can’t just turn in a paper and get a grade.”

While seeking solutions, students are guided by relevant engineering and design concepts drawn from material science, biophysics, biomechanics, and other areas. But it’s the real-world problems and the mentorship from clinicians that make the class effective, says Kofron, who teaches the course with Tripathi.

“Anubhav and I facilitate this, but there’s no way we could be experts in all these fields,” she said. “Our clinical participants provide that knowledge base. Brown is in the perfect place to do this because we’re so well-connected with the medical school and with clinicians at Rhode Island Hospital, Women and Infants and other hospitals.”

Ileana Pirozzi was an Embonet team member along with fellow 2018 graduates Berke Buyukkucak, Celina Hsieh, Gian Ignacio, and Emily Holtzman (RISD ’18). She said that the problem-based approach and the chance to work with a surgeon were invaluable.

“It’s really about bridging that gap between the engineering and the medical,” she said. “Engineers need to become fluent in medicine and understand the priorities of the operating room and the shortcomings of current technologies. Being able to sit in on surgeries and to look at medical devices to understand why they’re failing...was something you can’t get in a classroom.”

Another class team designed a system to help implant electrodes for deep brain stimulation (DBS), used to treat Parkinson’s and other movement disorders. DBS involves placing electrodes into the brain that deliver a small electrical current, which helps to regulate abnormal brain activity. Current DBS systems are inflexible; they’re either on or off. But clinicians envision advanced systems that can sense a patient’s brain activity at any given moment and adjust the current accordingly.

Prototypes of such systems exist but haven’t yet been used in trials—partly because more complex systems are incompatible with current surgical equipment, specifically the guide tubes used to put electrodes in the brain. That problem was presented to the class by Dr. Wael Asaad, a Warren Alpert Medical School professor of neurosurgery. Owen Leary, Rohan Rastogi, Zakir Tahiry, and Noah Trac (all class of 2018) designed a new guide tube that can accommodate more complex electrode arrays. The design won first prize in a category of the Northeast Bioengineering Conference last April.

Leary said that working with Dr. Asaad was critical. “He allowed us to go into the operating room and see the surgery for ourselves. That helped us conceptualize the procedural bottleneck that seems to be preventing the implementation of more complex current exchange systems in DBS.”

The team holds two preliminary patents on their design, and before Leary starts at Alpert he is taking a year off to pursue the idea further.

He said the class gave him a new perspective on biomedical engineering. “Actually having the opportunity to try your hand at designing a device that might get translated to patients—and to have it discussed in an entrepreneurial framework—has been unique in my experience.”

Reader Responses to Figure It Out!