The Science of Aging
Animals as different as worms and humans get old in similar ways, opening pathways to unlock the mysteries of aging. Brown scientists search for keys to living longer—and better. 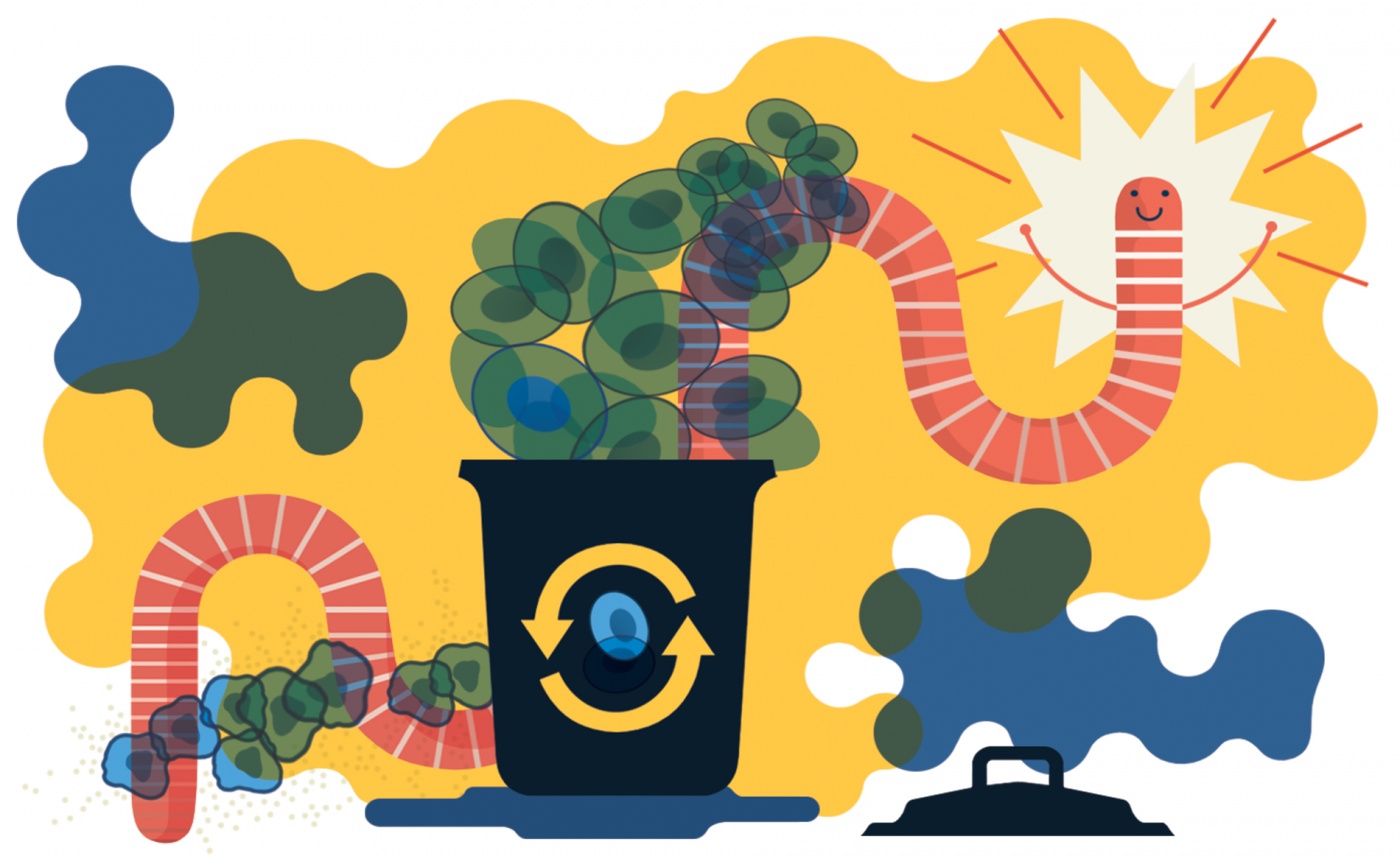 The technical stuff: Understanding how cell recycling links to aging.
What’s the nugget? Research that could one day lead to treatments for age-related diseases.

Cells recycle. Like sorting glass from aluminum, they collect mis-folded proteins and other broken-down cellular machinery. When the recycling bin—called an autophagosome—has enough material, it jacks into the cell’s digestive machinery, which breaks it back down into useful chemical parts.

Called autophagy, this recycling may be a key to new treatments for age-related disease. “Autophagy goes down with age,” says Louis Lapierre, an assistant professor of molecular biology, cell biology, and biochemistry. “It needs to be ramped up for animals to live long. One of our goals is to maintain that process as long as we can.

The number of genes shared by humans and the worm C. elegans that are controlled by the same longevity-supporting proteins.

Autophagy works similarly in animals ranging from worms to humans. Lapierre wanted to figure out the chemical language that fires up this recycling process. A protein called TFEB regulates autophagy, and Lapierre’s team’s first experiment found that cells holding more TFEB in the nucleus increased autophagy and also increased worm lifespan by about 15–45 percent.

Next they found compounds called SINE (for selective inhibitors of nuclear export) that trap TFEB in the nucleus, triggering autophagy. They used them to treat a fruit fly genetically designed to suffer from symptoms like those of ALS, a neurodegenerative disease of the brain and spinal cord. Fly lifespans increased significantly.

Most exciting, similar increases were observed in human cells in the lab, a promising lead on potential new treatments for ALS and on age-related conditions such as Alzheimer’s. The results were published in May in the journal Cell Reports and Lapierre is already talking to funders about testing the approach on mice. “That’s the beauty of this project,” he says, “that when we went into human cells we saw the same effects that we saw in the worms.” 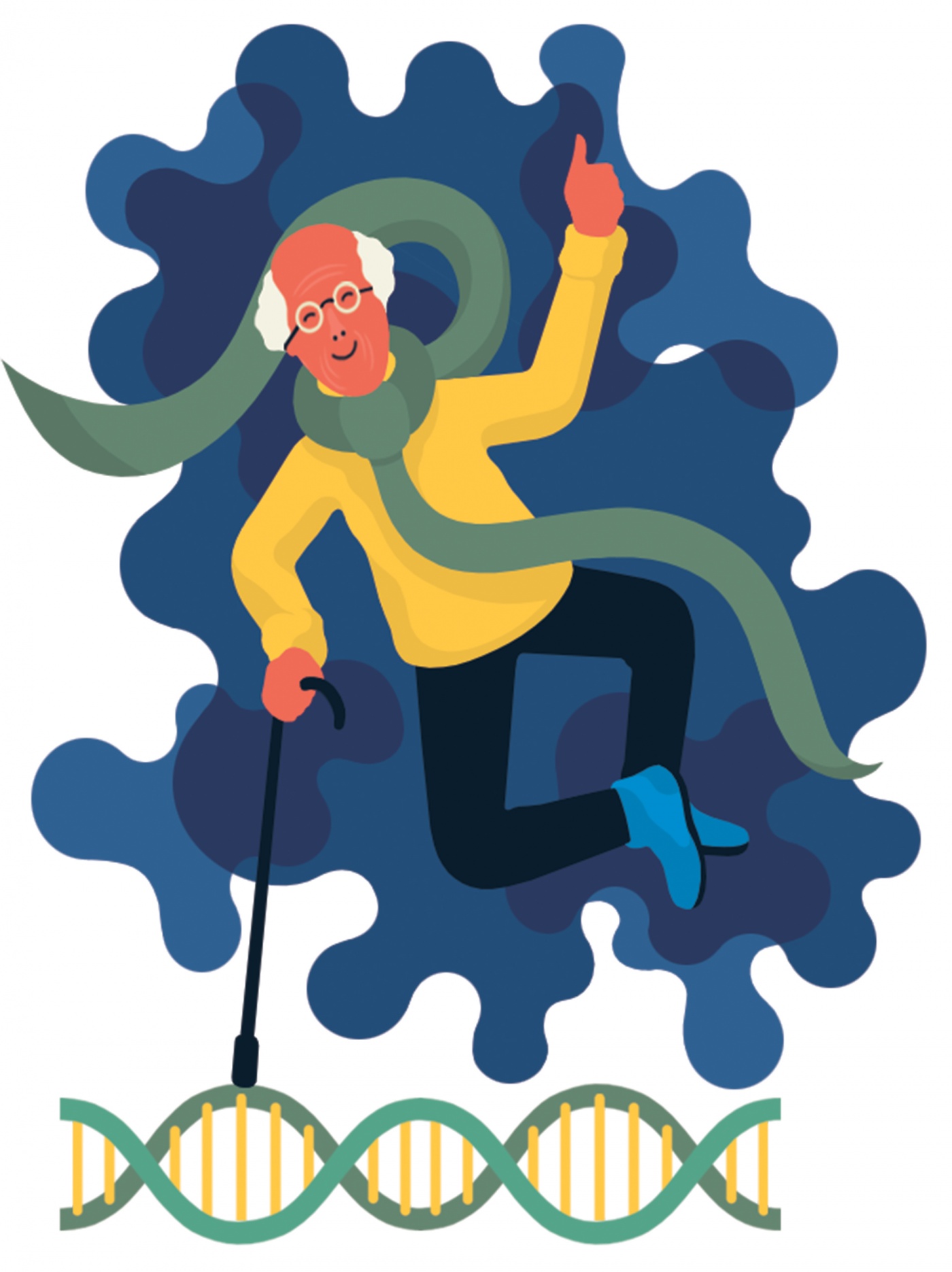 The technical stuff: Probing how the FOXO gene family ties to aging.
What’s the nugget? Finding new ways to enhance rather than extend human life in old age.

Since the human quest for immortality met the age of genomics, few discoveries have been as exciting as the FOXO family of genes. These create proteins that play a significant role in how your cells resist stress, use energy, reproduce, and ultimately die.

Ashley Webb, assistant professor of molecular biology, wants to harness FOXO knowledge to promote the idea of enhancing, rather than massively extending, human life. “We’re trying to come up with ways to improve general health in the elderly so that people can live better, more independent lives and be disease-free longer,” she says. “And that would reduce the health-care cost burden.”

In 2016 Webb, working with her post-doctoral advisor, Anne Brunet, from Stanford, compared the human genome to the three major medical research species (C. elegans worms, fruit flies, and mice) and identified for the first time 46 genes shared by all four animals that are regulated by the same family of FOXO proteins.

Webb’s study reinforced the link between the FOXO gene group and aging and longevity. It also served as a warning that FOXO may not be a silver bullet. “We need to be really, really cautious, because FOXO could be very good for the health of the cell in one tissue but actually induce cell death in another,” says Webb.

Now Webb is using FOXO in her latest work investigating critical tissues in the aging brain. Webb’s lab has learned that FOXO helps maintain a healthy metabolic state for stem cells in the hippocampus (which helps turn short-term information into long-term memory), further indication that they are in the right neighborhood in their search for therapies to combat brain degeneration. “This molecule that we think generally promotes healthy aging is also important for supporting healthy stem cells in the aging brain,” Webb says. 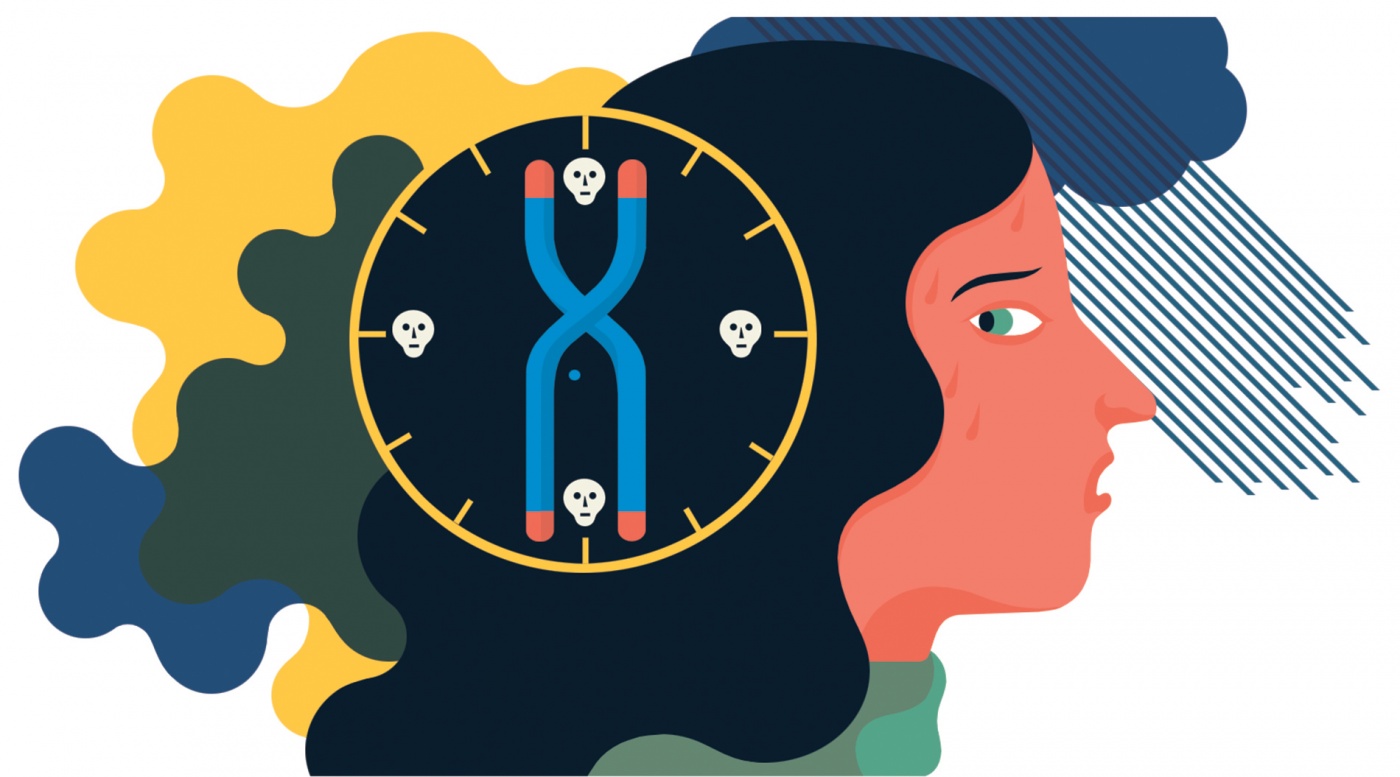 The Stress Clock
The technical stuff: Telomeres are DNA bits that shorten as we age.
What’s the nugget? They also appear to be linked to childhood trauma—and perhaps shortened lifespan.

Scientists who study aging are keen to find a ticking clock—one biomarker that counts your days. A major candidate: telomeres, bits of DNA that cap your chromosomes to keep them from degrading or fusing with neighbors.

We know that telomeres shorten as we age and also in response to toxins such as radiation and smoke. It’s commonly thought that shortened telomeres lead to DNA damage and other factors linked to aging, forecasting a shortened lifespan. There’s still no consensus on this, but scientists like Audrey Tyrka, professor of psychiatry and human behavior, keep adding to the list of aging-related telomere effects.

Tyrka studies how psychosocial stress affects telomere length. Early observations included the insight that they shorten quite a bit during early development, as well as in certain psychiatric disorders associated with stress exposure and shortened lifespan. Combining these facts, Tyrka wondered if early-life exposure to adversity might abet telomere shortening. In 2009 she looked at a small group of adults, one third of whom reported childhood abuse. “We showed a significant reduction in telomere length in those with a history of maltreatment,” she says.

Should you worry about telomere length along with things like cholesterol level and obesity? That might be redundant, suggests Tyrka. “Most of the things we already know we should be doing for our health are the things that we know affect telomere length—a healthy diet, stress management, and exercise.” But she says that her research underscores the importance of protecting children from trauma and giving families resources to provide a healthy and safe environment.

Reader Responses to The Science of Aging