Let's Pass It Out

"This," Sidney Frank said when he accepted an honorary doctorate of humane letters at Commencement last May, "is the greatest day of my life." 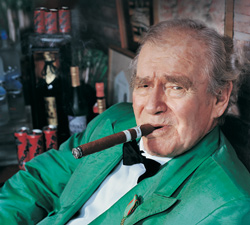 It was no small claim for a man worth billions, a man whose marketing brilliance turned a bitter-tasting liqueur into a favorite of college-age consumers, and a man whose largesse was as grand as his iconoclasm. But Frank, forced by poverty to drop out of Brown before he could earn his AB, had finally been granted what had eluded him for more than sixty years: a Brown degree.

When Frank died on January 10 in San Diego at the age of eighty-six, he had accomplished one of his goals: to become the University's greatest benefactor. At his death his contributions stood at more than $120 million, and he was still giving. After forging a friendship with President Ruth Simmons, he embraced her goal of making Brown accessible to talented young people who, like both Simmons and him, could not afford to pay for an expensive education.

His 2004 gift of $100 million-which came on the heels of a $20 million one for a new academic building-immediately added $5 million to the University's financial aid bud?get and freed administrators to finally declare admissions need-blind. After Hurricane Katrina hit the Gulf Coast last August, Frank's daughter, Cathy Frank Halstead, a Corporation member, called Simmons to say that her father wanted to give Brown another $5 million so that his alma mater could take a lead in helping Katrina victims. "I started crying," Simmons told the BAM. "I was literally speechless." (See "Seeking Higher Ground," November/December 2005.)

Born in Montville, Connecticut, on Oct. 2, 1919, Frank grew up on a farm and attended Norwich Free Academy; the town paid his tuition. His entrepreneural spirit emerged when he was twelve and with his brother charged tourists a dime to climb their ladder to see the view atop nearby Mohegan Rock.

As an adult, Frank liked to say that relationships-with employees, distributors, and other executives-were key to his success in business. He believed it was a lesson he'd first learned at Brown, where his roommate was Edward Sarnoff '42, who introduced Frank to the woman who would become his first wife, Louise "Skippy" Rosenstiel, the daughter of Lewis Rosenstiel, who then owned Schenley Distillers. "I was looking for a rich girl," Frank told the BAM two years ago, "and she was rich, beautiful, and smart."

After working as a troubleshooter of aircraft engines for Pratt & Whitney, Frank joined the Schenley division that distilled alcohol for motor fuel and later moved to the liquor side of the business. At 54, he founded Sidney Frank Importing Company, struggling to sell products such as Gekkeikan sake and occasionally having to sell paintings from the family art collection to meet the payroll. After buying the distribution rights to Jagermeister, a liqueur he discovered in the German bars of Manhattan, he read a Louisiana newspaper article reporting that it was rumored to be an aphrodisiac. Frank later said he made millions of copies of the article and then hired young women to dress provocatively and distribute them in bars around the country. Sales eventually rose from 600 cases a year to 1.3 million.

His later success with Grey Goose vodka was an early example of snob marketing. He designed the frosted bottle himself, and named the vodka Grey Goose because it sounded elegant. It was made in France and sold in wooden boxes because the best French wines were transported that way. In June 2004, he sold Grey Goose to Bacardi for $2.3 billion. After that, he approached philanthropy with the same purpose and drive he'd brought to selling liquor. Frank's attitude, his attorney, Jeff Peace, told the BAM, "is not 'mine, mine, mine.' It's 'let's pass it out.' "

Louise Rosenstiel died in 1972. Frank is survived by his wife, Marian, a daughter, a son, a sister, five grandchildren, and two great-grandchildren.

For more about Sidney Frank, see "The Giver" in the November/December 2004 BAM.

Reader Responses to Let's Pass It Out