In a 1971 article in the journal Science, Peter D. Eimas showed that babies as young as one month can differentiate the sounds pa and ba. The landmark article launched a new area of study: infant language acquisition. Eimas, who was the Fred M. Seed Emeritus Professor of Cognitive and Linguistic Sciences, died on October 28 at his home in Providence. He was seventy. 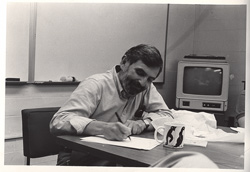 After joining the Brown faculty in 1968, he was soon observing babies’ recognition of sounds by noting the rate at which they sucked on a pacifier. Babies sucked faster when researchers changed the the sound of the consonant being articulated. “It turns out that infants categorize sounds,” Eimas told the BAM in 1983. “If you give a baby two different versions of a p sound, there is no difference in the sucking rate. If you then give it a b sound, the baby’s interest quickens.”

“It was the first time anyone had ever actually tested infants’ sensitivity to the sounds of speech,” says colleague William H. Warren, chairman of the Department of Cognitive and Linguistic Sciences. He explains that the study strongly suggested that infants are born hard-wired to process the sounds of human speech. Eimas published the 1971 article with a fellow professor and two students, including Peter W. Jusczyk ’70, who at the time of his death in 2001 was among the top researchers in the field of infant language perception (see “The Children’s Interpreter,” Obituaries, November/December 2001).

In a later study on vision in preverbal infants, Eimas found that even very young babies can distinguish cats from dogs in pictures, suggesting that babies are hard-wired to categorize pictures as well as sounds.

During his career at Brown, Eimas received a Guggenheim fellowship and a James McKeen Cattell Sabbatical Award. He was a fellow of the American Psychological Society and the American Association for the Advancement of Science. He published more than a hundred research articles and coedited three research volumes. A demanding but popular teacher, Eimas helped establish the cognitive and linguistic sciences department. He earned his undergraduate degree at Yale and a doctorate from the University of Connecticut. He is survived by his wife and sometime collaborator, Joanne Miller, a daughter, and three grandchildren.

An academic symposium on campus this fall is being planned in his honor. The University has also established the Peter D. Eimas Graduate Fund to support the work of graduate students in cognitive and linguistic sciences. Contributions should be made out to Brown University, with a memo noting the fund, and sent to Brown University Gift Cashier, Box 1877, Providence 02912.

Reader Responses to Listening to Babies