The Cogut Humanities Center occupies modest, ground level quarters in Alumnae Hall, where the chairs look circa-1970s and the nameplates are printed on office paper taped to the wall. But Michael Steinberg, who arrived in July as its first permanent director, has grand plans for the center, which the University established two years ago to encourage humanities scholars to collaborate across disciplines. 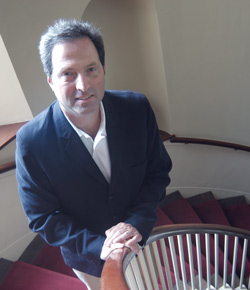 Michael Steinberg is the first director of the Cogut Humanities Center.

Steinberg, a former recipient of the John Simon Guggenheim Memorial Foundation Fellowship, came to Brown from Cornell, where he was a professor of modern European history. He took over the center from history professor and interim director Carolyn Dean.

Steinberg wants to build Brown's name as an intellectual destination, he says, "not as a quiet neighbor of Harvard and Yale." His first event will be a humanities weekend, scheduled to begin November 4, that will include public symposiums on how the humanities intersect with the sciences and with architecture. In February the center will welcome its first visiting scholar, Pamela Rosenberg, general director of the San Francisco opera. Also in the works is a competitive fellowship program that will allow four Brown faculty members each semester to take a leave to focus on new directions in their research and teaching. The first fellowships will be awarded for the spring semester.

The Andrew W. Mellon Foundation has awarded more than $1 million to the University to establish a postdoctoral fellowship program in the humanities. The fellows, the first group of whom will arrive next fall, will be affiliated with the center. Steinberg says they will specialize in new or underserved fields, such as cultural studies.

In three years, the center will move out of its temporary office space. Craig Cogut '75 and his wife, Deborah, have donated the lead gift towards a $10 million project to restore and expand Pembroke Hall as the center's permanent home.

An expert in cultural history, Steinberg is teaching a fall history seminar on philosopher Hannah Arendt and a spring music seminar on Wagner. He says he has always been drawn to questions that deal with the problems of the world. "It was never easy for me," he says, "to decide in which disciplines to look at those problems. The world doesn't organize itself the way disciplines organize themselves."