When writer Paul Grellong was a senior at Brown, he played the doomed, dreamy inventor Hialmar Ekdal in a production of Henrik Ibsen’s The Wild Duck. In addition to keeping to a hectic rehearsal schedule, Grellong spent hours talking with the director about one of the play’s most famous lines: “Take the life-lie away from the average man and straight away you take away his happiness.” The play is a profound meditation on the necessity of self-delusion for survival. 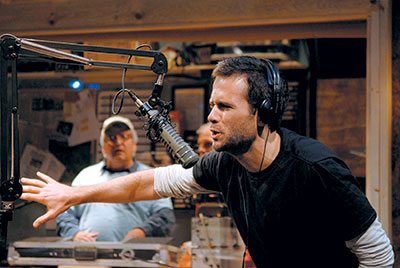 That same theme lies at the heart of Grellong’s latest play, Radio Free Emerson, which is in fact a loose adaptation of The Wild Duck. Radio Free had its world premiere in May at the Sandra Feinstein-Gamm Theatre in Pawtucket, Rhode Island, cementing Grellong’s reputation as one of the country’s most important new playwrights. One Rhode Island theater critic called the work “remarkably compelling” and “brilliant.”

Grellong wrote Radio Free during the off-hours of his full-time job as a writer for the NBC police drama Law & Order: Special Victims Unit. Writing for TV and theater requires “two completely different sets of muscles,” says Grellong, “but dialogue is the engine for both. We tell stories through conversations.”

Indeed, you might look at Grellong’s most successful play, Manuscript, as a series of highly dramatic conversations about an unpublished book that just happens to guarantee riches and success to whoever possesses it. The characters in the play, which was produced off Broadway in 2005, are selfish, snotty, and ambitious. Their conversations turn dark and vengeful.

In Radio Free, the Ekdal character Grellong played in college has become Henry, a likeable, if somewhat bumbling, contractor who dreams of making a fortune building houses in Rhode Island. He is thwarted by his close friend, Al, who after spending time lobstering in Maine returns to Providence spouting some very strange ideas he’s extracted from Ralph Waldo Emerson’s essay “Self-Reliance.”

Al preaches “going out and doing whatever you want and whatever feels good,” Grellong says. “He wants people to follow their hearts, but expresses this by telling people to go out and have illicit affairs.” Al’s analogue in The Wild Duck is Gregers Werle, also an idealist, though his philosophy derives from Christianity rather than Transcendentalism. Gregers and Al “are false prophets,” Grellong says. 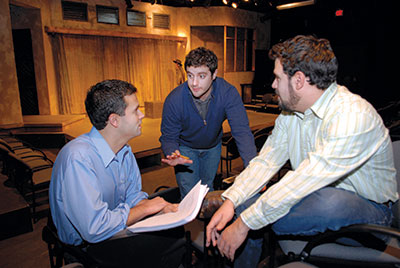 Grellong, center, rehearses with the cast.

Once Al gets his own talk-radio show, his message proves highly persuasive, both to his listeners and to Henry. The results, just as in The Wild Duck, are tragic. Secrets better left unrevealed come to the surface, destroying the fabric of the characters’ lives. The play functions as a devastating indictment of talk radio, blind idealism, and America’s celebration of the pursuit of self-interest.

After graduating from Brown, Grellong lived for several years in Rhode Island, and says it makes him “really happy” to have his play debut in the state. He now lives in Los Angeles, where he is wrapping up another season of Law & Order. Then it’s back to playwriting. Grellong doesn’t want to discuss his next work, but says that, like his other pieces, it is likely to be about “people who lie to each other, create a problem, and then need to fight to fix it.”