How to Lose Weight

Joan White had tried it all: fad diets, gyms, programs like Weight Watchers. But what finally helped stop her midlife spread, pare off ten pounds, and change her style of living was SisterTalk, a Brown-run weight-loss program specifically aimed at black women. 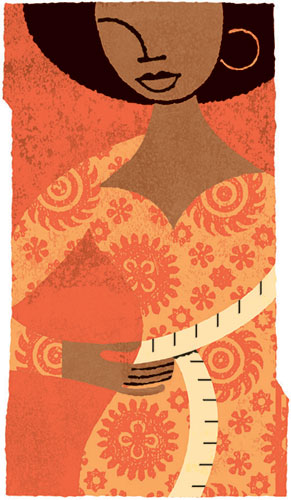 In 2003 White answered an ad in the Providence Journal seeking research subjects for a three-month clinical trial aimed at helping low-income black women lose weight. Because obesity disproportionately affects black women, the aim of SisterTalk is to develop weight-loss methods particularly suited to the cultural and economic circumstances of low-income black women from a variety of African and Caribbean backgrounds.

Nine months after the study’s completion, several of its 636 participants had lost eighty-five or more pounds; the average was four-and-a-half pounds.

This spring the National Institutes of Health awarded Community Health research professor Tom Lasater more than $2 million to expand SisterTalk into a five-year clinical trial for 540 women and to enroll another 180 in focus groups.

The women in the 2003 study were divided into three groups: one tried to lose weight on its own; another received printed materials and weekly DVDs by mail; and a third met weekly at local churches to receive new materials and discuss progress. The group that met weekly lost more weight and gave the program its highest rating, Lasater says. To build on that, the new trial will work to create support groups with twelve religious organizations.

SisterTalk provides pedometers, workbooks, and customized weekly DVDs on topics related to health, nutrition, and exercise. The experts on the DVDs are medical professionals, not actors, and most are women of color. “You never felt they were talking down to you,” White says.

Lasater says the women in the study liked the flexibility the materials gave them: allowing them to exercise whenever they were free and to cook foods associated with their cultures. The workbooks included techniques for making traditional dishes more healthful—oven-frying foods like chicken and okra, for instance, rather than frying them in fat.

White says the nutritional advice paid off not only for her but also for her husband. Although he initially made fun of all the olive oil and vegetables she was eating, he changed his mind after suffering a stroke. “Fortunately,” she says, “I knew exactly what he should be doing.”

Reader Responses to How to Lose Weight