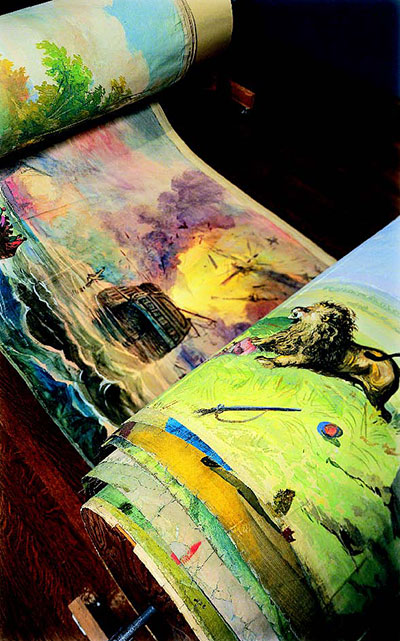 Before there were movies, kinetoscopes, or even magic lantern shows, there were panoramas. Audiences stood in the center of a large cylinder whose panels depicted a well-known landscape, cityscape, or battle scene. At the beginning of so-called “panorama-mania” in the late 1700s, viewers slowly turned around in a circle, creating the impression that they were sweeping across the landscape.

By the height of the craze in the 1850s, panoramas were suspended between two polls and slowly rolled from one to the other. One of the finest surviving examples is the Garibaldi Panorama, which is housed in the Annmary Brown Memorial on campus.

At 273-feet long and four-and-a-half feet high, the panorama’s watercolor frames depict battles and adventures from the life of the nineteenth-century Italian patriot Giuseppe Garibaldi, including his role in the Italian liberation movement and his daring escape to South America.

Soon you won’t have to travel to Brown to see the Garibaldi panorama. This summer, archivists photographed it by unfurling it six feet at a time. Once they combine the images and upload them to the Web, the complete panorama will unfold across your monitor, simulating the experience spectators had 100 years ago.

Brown archivists hope to have the panorama online by November. View it then at http://dl.lib.brown.edu/garibaldi.