A.J. Jacobs is not a religious man. He’s Jewish, but in a secular way. (“The same way Olive Garden is Italian,” he says.) Still, his Year of Living Biblically recounts his experiment in following the Bible as literally as possible. For eight months he adhered to the rules, both big and small, of the Old Testament, and for another four he did the same with the New Testament. He tried not to lie, not to covet, and not to shave. He even went so far as to stone (okay, pebble) an adulterer. 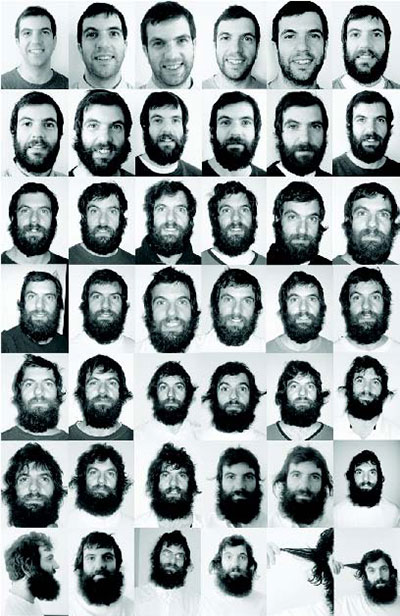 When A.J. Jacobs got religion, he also got hair—lots of it.
— Courtesy Simon & Schuster

BAM So you finally used that philosophy degree from Brown.

BAM Why do this?

AJJ I needed to find out what the Bible says and get into the minds of the ancients who wrote it and find out what was relevant and good for my life and what was not. The second goal was to try to point out, in hopefully an entertaining and humorous way, that the literal interpretation of the Bible is dangerous and that we should look to it as poetry and metaphor and wisdom but not take every word literally.

BAM What was the hardest part?

AJJ To not covet. I live in New York City, and that’s how we spend 80 percent of our time. I certainly didn’t win the battle not to covet, but I made a couple of small strides. Now it’s maybe 60 percent.

BAM Which rituals do you still do?

AJJ I wore white during my year because there is a line in Ecclesiastes that says, “Let your garments always be white.” I found out I love wearing white clothes. There is something uplifting about it. I can see why Tom Wolfe does it. I also say “prayers of thanksgiving” before meals. And while I don’t observe the Sabbath as an Orthodox Jew, I do love the idea of this enforced pause in the week. It just lets you step back and evaluate what you have.

BAM So is a bar mitzvah in your future?

AJJ I definitely felt deprived when I didn’t have one when everyone else did, because of all the fountain pens and Atari consoles. But my three sons will have bar mitzvahs.

BAM Paramount has optioned the script. Who would you like to play you?

AJJ The dream is Ben Stiller or Jack Black or Jim Carrey. But I’d be happy with Dennis Farina. Or Fyvush Finkel.

BAM Earlier you spent a year reading an encyclopedia. Is this a continuation of your quest to know everything about everything?

AJJ Yes. I love knowledge, and I love learning. So I try to climb intellectual Mount Everests and see what comes of them.

Mia Gieger is a freelance writer in the Philadelphia area.