A Circle of Gold

It happens all the time.

“That’s such an interesting ring! May I see it?”

“Sure.” I slip it off my finger and hand it over.

“Thanks,” I say, accepting it back and returning it quickly to my ring finger. The sooner it’s back there, the sooner we can get off this awkward topic. 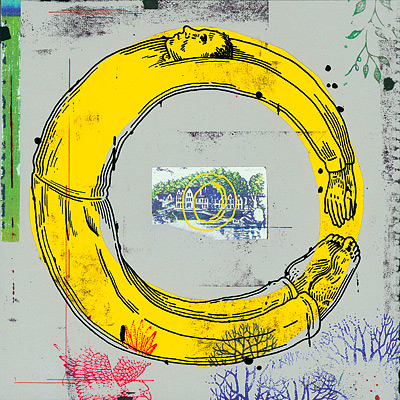 Yes, it’s true. Three and a half years after graduating from college, I still wear my high school class ring. That’s unusual, I know. And it’s not as if I didn’t love Brown—I did, and I am proud to be a Brunonian. But leaving aside the simple fact that I thought the Brown rings were ugly, this high school ring has been on my finger for almost eight years. It’s become a symbol to me, a part of who I am. The ring itself, the process by which I got it, even the occasional doubts I have about wearing it—these add up to much more than a piece of jewelry. My ring is part of my adult self.

When I got the ring, in 2000, I felt the start of a new millennium spoke to me of promise. When it came time to engrave my name inside the band, I eschewed convention and instead chose to have put there To boldly go, that wonderfully split infinitive from Star Trek. My ring became a statement that the future is not frightening but full of hope, that humankind can rise above the things that divide us. I was leaving home, going off to college, to grow and learn how to be an independent adult; in the same way, the human race was going to grow into the twenty-first century and beyond.

There was a less grand, more personal side to getting my ring. Men wear rings; boys don’t. Buying one meant accepting that I was growing up. And if I was going to buy a ring, then I was going to wear the damned thing. Period.

And so I still do.

But not always easily. Sometimes I wonder what on earth I am doing with a gold ring on my finger. While I was at Brown, I spent six weeks working and studying on a sailing ship. I couldn’t wear my ring: it got in the way of all the work I did with my hands. On our last morning, after we’d tied up to the quay at Key West, I got dressed in the going-home clothes I had kept sealed in a Ziploc bag and put my ring back on. It felt alien, out of place. At sea, I had gained a new perspective on the frantic pace of life on land and the extremely materialistic culture I lived in.  My flashy gold ring now seemed a symbol of all that, and on the way to the airport I wore it with distaste. But as I was writing in my journal on the plane, I started to reconsider. Perhaps precisely by being a materialistic symbol, the ring could remind me of my discomfort with those values. That guilty anti-rat-race squirm is part of me, and occasionally wondering if I should get rid of my ring could help me remember that. And so here it is, still worn proudly on my finger at the age of twenty-five. I don’t expect to take it off anytime soon. As a symbol of future possibilities, past milestones, and the questions I ask about myself, I value its comforting presence. For after all, our hands are a large part of what separates us from other animals—hands that can innovate or inflict, build or batter down. What better place to carry a reminder of who I am and what I hope we can all become?

Reader Responses to A Circle of Gold