Technology and football aren’t just about videotaping scandals. At Brown Stadium, in fact, technology is getting a good name. Football players are part of a research project that has them wearing high-tech helmets coaches hope will help reduce the incidence of brain damage.

Each time a player is hit on the head, six sensors in the padding of his helmet measure the magnitude, duration, and location of the hit. The sensors—they’re the same as those used to detonate automobile airbags—transmit that data wirelessly to a computer on the sideline for analysis. 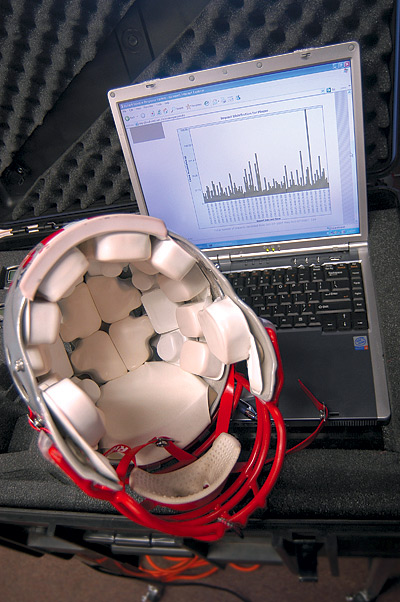 Frank Mullin
“We want to know if a concussion is caused by the magnitude of the blow, if it has to do with being hit at a certain point on the head, if it has to do with a rotational blow, or if it is a combination of multiple factors,” explains the team’s head trainer Russ Fiore, who is helping to coordinate the study. “This is cutting-edge research.”

This season, sixty-five Brown football players are wearing the high-tech helmets, which cost about $1,000 each. The five-year study is funded by the National Institutes of Health. Dartmouth and Virginia Tech are also taking part.

While the new helmets won’t prevent concussions, the technology does allow trainers, coaches, and medical staff to better monitor athletes and identify their risk levels. Trainers know exactly how many hits a player has sustained, as well as the severity of those blows. “This technology allows us to track hits on a daily basis from games and practices,” head coach Phil Estes says.

The data are transmitted in real time, and if the impact exceeds a certain level, computer automatically sends an alert to Fiore, who wears a pager at all games.

But intensity doesn’t always correlate with damage, which is part of what the study aims to understand. “My pager went off twelve times during the Cornell game,” Fiore says, “but there were no concussions. I’ve seen concussions at low hits, and I’ve seen hard hits and no concussions. We’re still examining the information.”

Tracking the data and monitoring athletes could help detect concussions that might have slipped by in the past, and it could also help to prevent athletes from playing through the pain and risk- ing further brain damage and possibly permanent injury.

For now, Estes says, “We’re accumulating a whole bunch of data. We’re looking at it, but we won’t know the full results of this study until five years down the road.”