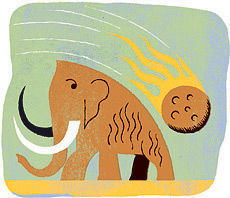 Timothy Cook
Just over 10,000 years ago, some amazing beasts roamed the planet—wooly mammoths, giant sloths, saber-toothed cats, camels, lions, tapirs, and the incredible teratorn, a condor with a sixteen-foot wingspan. Then suddenly they were gone. In the September Proceedings of the National Academy of Sciences , Professor of Geological Sciences Peter Schultz and several colleagues offered new evidence for the theory that an asteroid may have been responsible for this mass extinction. The team analyzed a layer of the earth’s fossil record and found such compounds as iridium, charcoal, soot, carbon spherules, and glass-like carbon containing nanodiamonds. Schultz says the nanodiamonds are particularly meaningful, as they’d form as a result of the intense pressure you’d get when a meteorite slams into Earth.
What do you think?
See what other readers are saying about this article and add your voice.