It was a storybook Fall. Co-captain Matt Britner ’08 came back from two surgeries to compete in his final season after missing all of the 2004 season and all but two games in 2006. His play was strong enough to earn Ivy League Player of the Year honors. As the season progressed, the Ivy title was in sight and the team looked forward to advancing deep into the NCAA tournament. They steam-
rolled their opponents, posting 15–1–1 regular season, their only loss coming on October 2 in a 1–0 shutout at home against Boston University. A perfect 7–0–0 in Ivy competition, the Bears took home Brown’s nineteenth title and, notably, its eighth under head coach Mike Noonan. 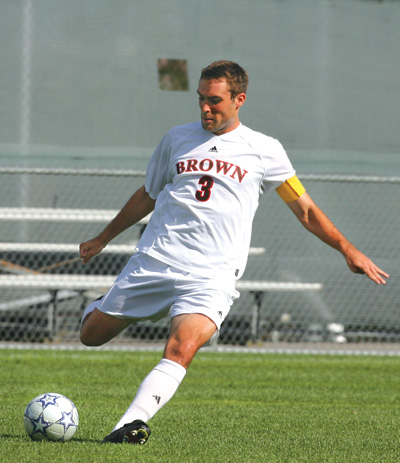 David Silverman
Brown also shone on the national stage. The Bears defeated several nationally ranked teams, including their first opponent of the season, Santa Clara, which was then ranked fifth. In October they beat Boston College, the eventual number-one seed in the NCAA tournament.

“The way the season started was exceptional,” Britner says. “It gave us the confidence in the beginning of the season that we could beat anybody in the country. From there the confidence within the team just grew and grew. We kept winning and winning. Even after the loss [to BC], we didn’t let that stop us. I think that win set the tone for the season.”

Brown crested at a number-two national ranking in some polls and was seeded sixth and given a first-round bye in the NCAA tournament, which was played in Providence in late November. The players were set for a deep run in the tournament. The Bears were favored in their first two games and were expected to go on to the Elite Eight.

But games are played on the field, not on paper. One team can dominate for most of a season and still falter in the end, and this is especially true in soccer, where a single well-placed kick can render a media guide full of statistics meaningless. That, in the end, is what happened on November 28, when Brown hosted Old Dominion in the NCAA tournament’s second round. The numbers looked good. The Bears held a huge statistical advantage in shots and corner kicks that day (18–9 and 14–2, respectively). Brown appeared to be controlling the play on the field.

True, the Monarchs took a 1–0 lead just 11:07 into the match. But after Noonan settled down his players at halftime, Kevin Davies ’08 knotted the score at 1–1 a mere three minutes after the intermission.

“The first goal [scored by Old Dominion] was a case of nerves and indecision,” Noonan says. “Looking back on it, I could have changed some things in the way that we approached the game because we’ve never had a bye. The second goal [scored by Brown] was going to happen. We were shutout one time all year. Kevin scored a great goal ,and we continued to push the issue and, even though the game went to overtime, we were very confident.”

Old Dominion’s second and deciding goal came at the 106:45 mark in the second overtime, just three minutes and fifteen seconds before the teams would have to turn to penalty kicks to settle the issue. The ball headed for the Brown goal from sixteen yards out, looping over the head of goaltender Paul Grandstrand ’11, who would later be named to the College Soccer News all-freshman first team.

“It was a surreal moment,” Britner says. “It was the end, and it didn’t feel like it. I hadn’t prepared for that. I was in shock when it was over.”

“When they scored the goal, it was a fluke goal,” Noonan says, still seemingly unable to believe it happened.

Britner, an economics and history concentrator who completed his degree requirements in December, hopes that his soccer career didn’t end on Stevenson Field on that cold November night. His plan now is to try to join the growing ranks of Brown-trained pros.

“I’m going to definitely explore the possibility,” he says. “It has been such a large part of my life since I was three years old. Not everyone gets the opportunity to try and play. If I didn’t, in five years I would wonder if I could. If it doesn’t work out, there is plenty of time to get a real job.”

Britner has already been invited to the Major League Soccer combine in January, a huge opportunity for potential draftees to showcase their talents to teams before the draft a few days later. If an MLS team doesn’t draft him, Britner may try to play in Europe. A native of Nova Scotia, Britner also holds a German passport, making him particularly attractive to European teams, as his spot on a roster would not count against the limit of “foreign” players.

“Matt can play at the next level,” says Noonan, who has seen several of his former players succeed in professional soccer. “Luck plays into that, too, but he has the skill set and the mentality to be a good, maybe even great, pro.”

Gordon Morton, who covers sports for the BAM, has written a book on the history of Brown athletics.