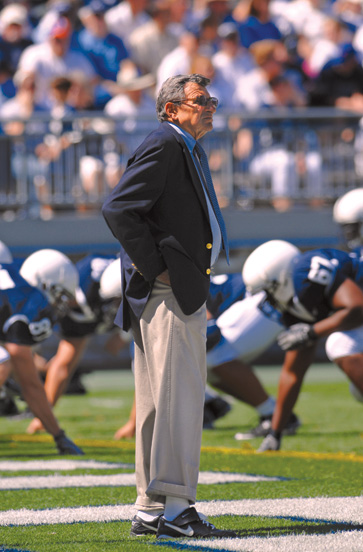 Paterno watches Nittany Lions warm up before taking on Florida International on September 1. Mark Selder/Penn State
Joe Paterno ’50 was a few minutes late to the press conference that preceded his induction into the College Football Hall of Fame in December. But at eighty-one years old, Paterno, who completed his fifty-eighth season as a Penn State football coach this fall, hasn’t missed a step. During that time, the school has played 656 football games. Paterno has missed three.

“I apologize for being one year and twenty minutes late,” he said after approaching the microphone.

Paterno was referring to the fact that he was actually scheduled to enter the hall in 2006, but was out of commission at the time recovering from injuries he’d suffered when two players inadvertently ran into him on the sidelines during that season’s Wisconsin game.

“I’m only sorry I wasn’t here last year with [Florida State head coach] Bobby Bowden,” he continued, “somebody I respect so much, somebody I think has done a magnificent job at his school. We’ve been very fortunate. God’s given us good health.” Then he added, “Every once in a while you get a little sloppy on the sideline and let somebody run into you.”

“I am very honored to be selected for the Hall of Fame and to receive the Gold Medal,” Paterno said in a statement at the time of the announcement. “They are the pinnacle awards anyone in college football can receive. Many people helped make this happen, starting with the great players with whom I’ve been involved and the great coaches who have been with me and worked in an unselfish way to help us have success and make the Penn State program what it is.”

Paterno, who became Penn State’s head coach in 1966 after sixteen seasons as an assistant coach, has built and maintained one of the premier college football programs in the country. Three days after Christmas last year he worked his 500th game as a head coach at the Valero Alamo Bowl in San Antonio, Texas. In that game, his Nittany Lions overcame a 14–0 first-quarter deficit to beat Texas A&M and finish the season 9–4, the twenty-seventh season with nine or more victories under Paterno. His all-time record is now 372–125–3, and he stands one victory behind Bowden (373–119–4) among major college coaches. 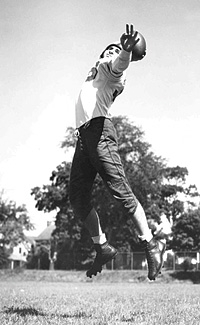 At Brown, Paterno was played quarterback on offense and a cornerback on defense; his fourteen career interceptions remain a school record. During his 1949 season, the Bears lost only one game and finished the season in a dramatic game against Colgate. With Paterno leading the team on the field, Brown scored three touchdowns during the last four minutes of the game for a 41–26 win.

After graduation, Paterno initially planned to attend law school, but when Brown head coach Charles “Rip” Engle left to coach at Penn State, he asked Paterno to come with him as an assistant. It was love at first snap. After forty-two seasons pacing the sidelines as head coach, Paterno has no plans to relinquish his headset anytime soon.