By Lawrence Goodman / January / February 2008
February 6th, 2008
For Stacey Farley, the artistic process begins at a town’s local historic society. There she spends weeks and sometimes months sifting through old photographs, ledgers, and even, as she says, “little scraps of paper.” Invariably, inspiration strikes. “An idea might lead me to a place or a place might lead me to an idea,” she says. “It’s certainly a lot of fun.” 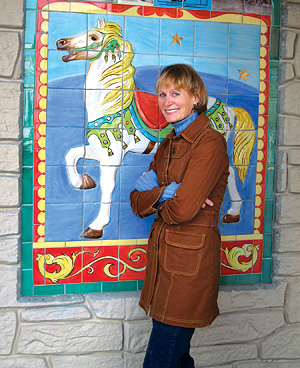 The end result of all this labor is typically a large tile mural depicting scenes from the town or city’s history. Farley specializes in designing murals for municipalities’ train stations, and she incorporates images, photographs, and text that are all somehow relevant to the changes wrought by the railroad’s arrival in the town. In a mosaic she did for the New Jersey Transit station in Secaucus, there are images of 19th-century horse-drawn carriages, old-fashioned bicycles, and farmland—reminders of what disappeared after the train linked the city to nearby New York. “The story of the railroad is really one of the great stories of America,” Farley says. “It changes the lifestyle and nature of the towns. Ideas move from place to place.”

Farley, who studied fine arts at Brown and then went on to get her MFA from the University of Illinois in Chicago, originally began by making her living doing tile work inside people’s homes. It was mostly ornamental work for bathrooms, kitchens, and fireplaces, but then in 1990, she was commissioned to paint a series of murals inside the Perkins Memorial Tower, a 40-foot tall stone structure located at Bear Mountain State Park in upstate New York. The tower sits atop one of the park’s highest mountains.

After this she became smitten with the idea of creating work both for and about everyday people and having it displayed publicly. “It’s very satisfying to have it be seen,” she says. “It becomes part of every day life.”

Farley works out of her studio near her home in Garrison, New York. She creates her tiles from scratch, heating and glazing the raw clay herself. “It’s a very primitive process,” she says. “It goes back to before the Egyptians.” She can then transfer photographs directly onto the tiles, write words, impress images, or silkscreen. She frequently depicts horses because they were commonplace before the railroad and then very suddenly disappeared as a mode of transportation. “I use a million different techniques to tell the story,” she says.

Farley has created murals for train stations in Mount Arlington, Secaucus, and Westfield, New Jersey, and in Peekskill in upstate New York. Her work in Mount Arlington is a homage to the area’s once-famous amusement park, Bertrand Island, which was open for more than eighty years beginning in the early 1900s. There are eight murals in all, and two of them feature pictures of carousel horses in teal blue, yellow, and pink and photographs of revelers at the park at the height of its popularity. “I hope my work—knock on wood—will last a long time,” says Farley. “This is not fleeting. It’s about history, and part of history.”