How we look can affect how we're treated. We all know that we cannot roll in from the construction site, hungry as a bear, go to a five-star restaurant without changing clothes, and expect to be seated. Drive the wrong car, wear your hair the wrong length, show public affection to the wrong sex, race, or culture, and let's face it, people will look at you differently. 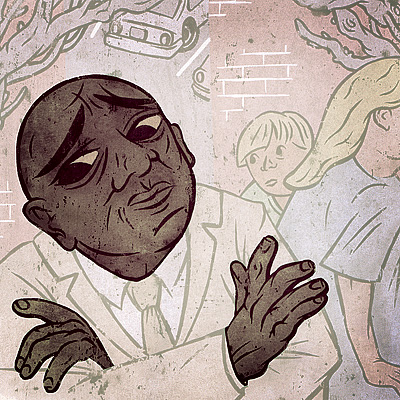 Philip Fivil Nessen
Black don't wash off. Put us in a nice suit, nice wheels, nice zip code, and make us members of the right club, and some fool with a badge is still going to shake us down to see what falls out.

The summer before my junior year at Brown, I ran down College Hill early one Saturday morning to catch a Bonanza Bus to Boston. There I was, a black man wearing jeans and a red T-shirt, racing through the deserted city. A police officer drove out of nowhere and stopped in front of me as I ran across the last street before the bus stop. I literally fell onto the hood of the car, and when I pushed myself back, my mother's oldest son was looking down the barrel of a revolver. My crime: I fit the description of a bank robber.

Here we go again. I was only twenty, but this was the third time I'd fit the description of a bank robber. The first time, I was sixteen and riding my bicycle home from my dentist's office in Hempstead, New York. Do you know how your face looks when you just had a cavity filled? Cop didn't care. The dispatcher sent four cars to arrest one of me that time. The bank robber—who was on a motorcycle—got away.

Anyway, I don't recall Providence banks being open on a Saturday at 8 a.m. back in 1980. I don't believe that, today, showing a Brown ID should immediately clear a suspect, but it was sufficient for the officer to lose interest and speed off without even an apology.

I'll be honest: I am boring. I have never had a criminal incident. My teenage years were not troubled. I've never worn dreadlocks or tattoos. I've been affiliated with no gangs, and have no history of alcohol or drug abuse, of domestic violence, or of any "issues" that would profile me as a troublemaker. I even had a defense department security clearance for five years. At one time Uncle Sam knew more about me than my mother.

I have been harassed my whole life for being a black man in the wrong place, i.e., living in a white world. I have been harassed going for a walk in downtown Boston, and sitting in my car in the San Jose Hills waiting for a real estate agent. Israeli security agents refused to believe I was not a basketball player; I must be a spy because no one sends a black man to Israel on business.

I cycle more than 100 miles a week all over the San Francisco Bay area. I will not leave the house without an ID, because I know there are nervous housewives looking out their windows as I ride through their neighborhoods at eighteen miles an hour.

If I sound a bit sensitive, ask yourself how many gun barrels you have looked down with a policeman or some officer of the state at the other end. It's happened to me about a dozen times. Ask yourself how many times you have been arrested for making an illegal U-turn one mile from your house. I drive a nice sports car. I would never make a quick run to the grocery store in bummy house clothes. If I don't look like I own it, somebody is going to check to see if it is mine.

Reader Responses to Ask Yourself