Producer Janet Yang has advised Steven Spielberg on Empire of the Sun, produced movies for Oliver Stone, made thrillers with Ashley Judd, and hobnobbed with Sean Penn. But none of those collaborations prepared Yang for the real-life tragedy that disrupted her latest movie's release. 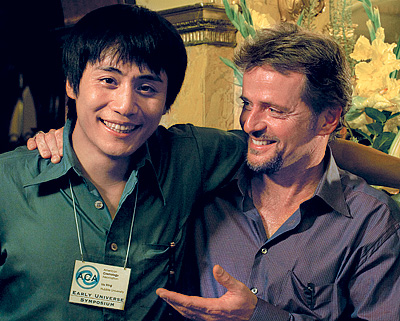 Mathhew Margolin
In Dark Matter, Liu Ye plays a grad student who feels betrayed
by his mentor, played by Aidan Quinn.
Loosely based on a 1991 shooting at the University of Iowa, Dark Matter, which Yang coproduced, depicts the rise and fall of a brilliant Chinese physics student whose dream of winning a Nobel Prize goes catastrophically awry during his first year at a U.S. university. "I feel this film offers an extraordinary glimpse into how students can unravel under pressure from parents, or foreign governments, or their own self-imposed pressure," Yang says.

Dark Matter, which stars Liu Ye, Aidan Quinn, and Meryl Streep, had its debut screening at the 2007 Sundance Film Festival, where it won the Sloan Prize for incorporating high-level quantum mechanics theory into its storyline. The filmmakers were fine-tuning the movie for theatrical release when the Virginia Tech killings happened last spring.

"That really threw us for a loop," Yang says. "The issues of campus violence and student alienation moved very much to the foreground of everybody's consciousness. We decided to take a hiatus." Instead the filmmakers are releasing Dark Matter this spring, with a DVD slated for fall. On February 14, another student opened fire in a classroom at Northern Illinois University, but this time Yang and her team chose to stick with their release plans. "These incidents are happening with such an alarming frequency, we can't hide our heads in the sand now," Yang wrote in an e-mail.

Born in Queens and raised on Long Island by immigrant parents, as an undergraduate Yang focused on Chinese studies and moved to Beijing in 1980 to translate texts for a government-operated publishing house. She had no ambition to make movies.

"When I was growing up," she says, "it was like there was an unwritten rule that Asians were not worthy of being on screen. Living in China I realized it was possible to have Asians playing all different roles in movies. A light bulb went off, and I thought maybe I can help push that forward in the United States in some fashion."

After returning to the states and earning an MBA at Columbia, Yang championed U.S. distribution of Chinese movies, brokered the first sales of American studio movies to China, and worked for Spielberg's Amblin Entertainment. In 1989 Oliver Stone hired her to run his production company, Ixtlan. Yang was executive producer on The Joy Luck Club, helped Stone produce The People vs. Larry Flynt, then formed her own enterprise, Manifest Films Company, in 1997.

When a former protégé approached her with the Dark Matter project, Yang jumped at the chance to collaborate with Shi-Zheng Chen, a Chinese actor, singer, director, and choreographer who emigrated to the United States in 1987, on his film directorial debut.

"I never had the privilege of working with a director who shared with me the bicultural experience," Yang says. "To combine that dimension of our lives with the work was quite special."