When you think of the most-performed living American composer, Philip Glass, John Cage, and John Williams all come to mind. But it's conceivable that the list should include Gwyneth Walker. 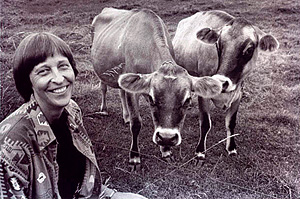 Over the last four decades, Walker has written close to 200 compositions—from choral arrangements to piano trios to symphonies—that have been performed in venues ranging from Carnegie Hall and the Washington National Cathedral to Oprah. Her compositions are staples of high school, university, community, and church-group choruses and orchestras. "I get calls and e-mail suggesting there are multiple performances of my works every day," says Walker. "It's a bit overwhelming, but also humbling to think I'm one of the most frequently performed composers of today." There's no way to verify this, but ECS Publishing in Boston, which sells Walker's choral sheet music, says her music is their number two seller.

Walker started composing at age two, tinkering on her parents' piano, and three years later they sent her to train with a piano teacher. However, "the teacher just wanted me to play scales and what was in a book," Walker says. "I told the teacher I was interested in playing new things and she just threw her hands up in the air and left me on my own." So Walker taught herself. The downside was that she didn't get any formal music training until senior year of high school; the upside was that she was free to experiment as she pleased. She played in a folk music band and also listened to rock and roll, influences that can still be felt in her classical compositions.

After majoring in music at Brown and getting an advanced degree from the Hartt School of Music at the University of Hartford in Connecticut, she took a teaching job at Oberlin College, expecting to spend the rest of her life comfortably ensconced in academia. But her teaching schedule left her little time to compose, and she quit in 1982 to write music full-time. Now she faced a different challenge. As she puts it, "How does one make a living from composing?" Grad school had been all about musical theory—"there wasn't any guidance about the practicalities," she says.

While her contemporaries were experimenting with minimalism and atonalism, Walker was writing more traditional and accessible compositions in the direct, unadorned style of American composers such as Aaron Copland and Charles Ives. "My pieces always have melody and form and a rhythm that's right there for you," she says. A Quaker whose roots in this country go back to the 1600s, she says her credo is "to live simply and quite straightforwardly. My music is the same." Among Walker's more popular works are "Songs for Women's Voices," a cycle of choral works based on six poems by the U.S. poet May Swenson, and "A Vision of Hills," a piano trio that Walker says was inspired by her home state of Vermont.

She learned that "if you wrote music that people liked, they would pay you for it," she says. A friend who was a pianist commissioned a composition. The friend had a neighbor who conducted a small orchestra in his hometown, and he asked Walker to write something for him. Some commissions brought as little as a few hundred dollars, but "there was a snowball effect," says Walker. "Each time I would write something for a commission, someone else would hear it and ask me for something else." Soon, commissions were pouring in from schools and orchestras all over the country.