One day in 2005, Adam Rubin went into the New York City brokerage where he worked, walked into his boss's office, and submitted his letter of resignation. He had no idea what he was going to do next. He'd simply become burnt out being a stockbroker. 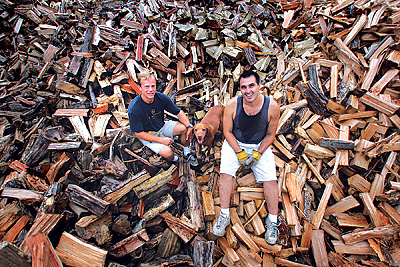 Rubin lived in the Park Slope neighborhood of Brooklyn in a nineteenth-century brownstone with two fireplaces. Every winter, he ordered firewood "from this small-time operator from upstate," he recalls. His neighbors bought wood from other suppliers. No one seemed to know much about where the wood came from or who was delivering it to them. They just knew it either came or, just as likely, it didn't. "It appeared to me to be such a fragmented, mom-and-pop business without any real quality control," says Rubin. He called up his old friend from Brown, Theodore Whitehead '86, who, as it happened, was unhappy working as a lawyer. They agreed to go into business together. They were going to deliver firewood.

But first they had to get wood. Whitehead lived in southern Connecticut on a two-acre plot that was getting a bit overgrown, so he and Rubin began clearing it. In the spring and summer of 2005, they spent almost every weekend felling trees and splitting the wood into logs. "We were in the best shape of our lives," says Rubin. When they finished—they had chopped up around fifty trees in all—"we thought we had half of the world's wood cut up," says Rubin. "It seemed like we had this huge mountain of wood."

They called their new company thewoodman (no space), and started selling firewood that September. By the month's end, they were out of wood—without any marketing. Thewoodman was coming up whenever New Yorkers googled "New York City" and "firewood." Clearly it was a popular search request.

The partners found a businessman in Pennsylvania who had dry firewood for sale, and two or three times a week Whitehead drove 250 miles each way to restock the company's supplies. Then he and Rubin drove around New York, delivering their product in a beat-up 1997 Isuzu pick-up truck they bought for $10,000 in what Rubin describes as "a very seedy part of New Jersey under the el." Orders continued to pour in. It was a profitable—if exhausting—winter season. "It was me and Ted kicking back and having a beer and pizza at the end of every shift," Rubin recalls.

Rubin now estimates that thewoodman is one of the city's largest distributors of firewood. The company sells "premium kiln-dried firewood," "naturally seasoned firewood" (dried in the open air), and stove wood for outdoor fire-pits. With another nine employees on staff, they hope to do $1 million in sales this year.

"Yes," he says. "I'd say I find it to be interesting. It's a whole different way of looking at the world." But then he adds, "The downside is that we're a small company and we're very much involved in a hands-on way. It's a typical entrepeneurial song of lament. At times it seems we're working twenty-four hours a day." —L.G.

Reader Responses to Into the Woodshed