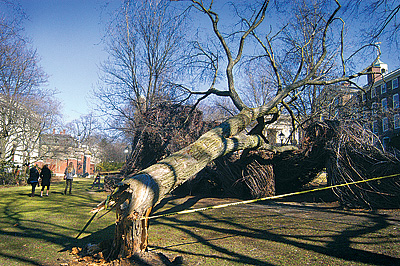 Patrick Dougherty's sculpture of woven branches on the College Green was destroyed in March when a blustery gale sent a nearby elm tree crashing down on it. Dougherty's installation, which was erected in the fall of 2006, was a series of giant boxes whose walls were made of maple and willow branches laced together by the artist as if he were making a basket. The work cost the University $14,000, but Dougherty had always said the installation would only last as long as Mother Nature permitted.
What do you think?
See what other readers are saying about this article and add your voice.