Few people except for Brown golf historians recall the exploits of Roland Mac-Kenzie '29 and Jean Bauer '33. MacKenzie played on three Walker Cup teams in five U.S. Amateurs, while Bauer was a two-time medalist at the U.S. Amateur. MacKenzie also had the distinction of winning the qualifying medal at the 1925 Nationals at Oakmont with a score of 145, beating Bobby Jones by two strokes. 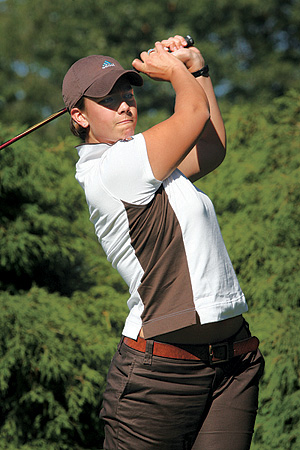 Photos by David Silverman
Blythe Crane
It's been more than seventy-five years since Brown has had a pair of dominant golfers able to etch their names in the history books and do things that no other Bear golfers have been able to accomplish, but this year two golfers could come close.

Keep your eye on Larry Haertel '08 and Blythe Crane '08, captains of the men's and women's golf teams, respectively. They hope to lead their fellow golfers to the top this season. "I would really like the team to do well," Haertel says. "We finished second last year, and I think we are even better this year. We have the talent to win. It would be a great way to end my Brown career—winning the Ivy title for the first time in Brown history."

As a freshman, Haertel finished tied for tenth at the Ivy Championship, but as a sophomore in 2006, Haertel became the first golfer in school history to win the Ivy League individual title. He shot rounds of 74, 70, and a tournament-low 68 in the final round for a total score of 212, winning the title by five strokes over two competitors in steady rain and wet conditions at Ballyowen Golf Course in New Jersey.

Last season he nearly followed up that performance with another title, missing the individual crown by one stroke. Haertel posted scores of 72, 76, and 73 for a total of 221, one shot behind Chris Condello of Columbia.

Crane has been almost as impressive on the women's side. As a sophomore, she finished third at the Ivy Championship with scores of 79 and 42, a 121 total that earned her first-team All-Ivy honors. It was the highest finish ever by a Brown woman at the event, topping the fourth- place finishes of Elizabeth Carpenter '04 in 2001 and Jennifer Bley '05 in 2002. In fact, Crane became just the seventh Brown woman to earn All-Ivy honors.

This season Crane hopes to once again finish among the top seven golfers at the Ivy championship to garner All-Ivy accolades for the second time in her career. 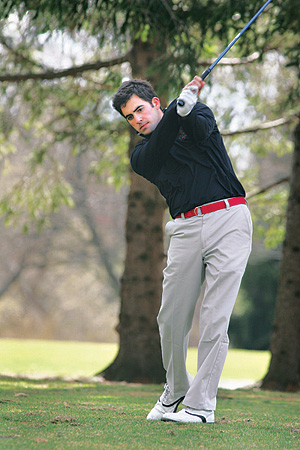 Larry Haertel
"A sub 76 or 78 scoring average and All-Ivy recognition would be ideal," Crane says. "Other than that, as a senior I just want to play and have fun. As a team, we're looking for consistency and we're looking to improve."

In September, Crane posted one of the best rounds of her career, when she fired a two-over-par 73 in the first round of the Yale Fall Invitational to take the lead over the eighty-three-player field at the historic Yale Golf Course.

"Blythe works very hard," said Danielle Griffiths, head coach of the Brown women's golf team. "She doesn't really have a weak part to her game. She is someone who can play after school, meaning she could play LPGA if she wanted to.

"She has some different ambitions. She is probably going to work right after school, but she is definitely good enough that she could go play on the Futures Tour or go try to make some money playing." —G.M.

Reader Responses to The Last Round