I want to run away from home. I really do. I know it sounds silly for an adult to say this, but my son's plunge into adolescence has driven me to consider this as a real and viable solution.As a parent, I know change is what children do. From the moment they are born they transform physically and emotionally, over and over. No sooner have you managed one issue than another pops up. 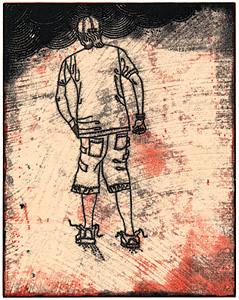 But this new stage of development doesn't feel like something I can survive. There is a stranger living with me, and I don't know what to do with him. Suddenly he doesn't need my rules; he tells me he is old enough to make his own decisions and, by correlation, his own mistakes. He says my rules are silly or embarrassing—uncool. He treats me like a dirty sock, something he holds at arm's length but doesn't throw away because it is still useful. He has taken to calling me Debbie Downer, a character on Saturday Night Live. He says I am unsympathetic to his needs and desires. He makes it clear he doesn't want my help, but I know he needs some kind of help.

In search of what to do, I head to the library, where I stumble across Jon Krakauer's Into the Wild, about a young man who breaks all ties with his family and starts a journey of independence that eventually leads him to Alaska and his death. It is an unbearable story from a parent's point of view. He is an amazingly bright kid with a good heart, but he harbors such anger and resentment that he just disappears one day without a single word or confrontation.

It's this secretiveness that worries me. Adolescence is a time of upheaval and withdrawal. It's hard to know what is going on within your child. Our only clue is to take ourselves back to our own teen years, but, as Krakauer notes, many adults find it difficult to remember what that was like: "for those of us preoccupied with the humdrum concerns of adulthood," he writes, [it is difficult] "to recall how forcefully we were once buffeted by the passions and longings of youth." The road into adulthood is treacherous, and there is no guarantee that your relationship with your child will endure. My son says he's just biding his time until he is free. When that moment comes will he disappear without a word? Is there an anger burning in his heart to which I am blind? Or is this just teenage bravado? When your child won't talk to you, you are left with only your imagination and intuition to guide you.

My son is at a crossroad, and so am I. On the one hand I want to give up, walk away, leave him to his own devices. Yet, on the other hand, I am his mother, his legal guardian. I love him. He is not yet an adult in the eyes of the law or in mine. He is in this awful twilight zone of becoming. He still needs my rules and concern, but he also needs me to let go—to let him learn how to manage his own life. Do I have the strength and wisdom to give him what he needs?

Surprisingly, in the midst of all this confusion I recently learned that the son I love is still out there. His teachers have sighted him. They write about him in their mid-semester comments: bright, gifted, funny, a joy to have in class.

If I can hang on long enough, maybe that boy will find his way home.

Reader Responses to Biding His Time